The effects of global warming/climate change will most likely have enormous impacts on turtles and other wildlife, mainly because the rate at which the climate is changing far exceeds the abilities of animals to adapt naturally to such dramatic environmental changes. In fact, scientists predict that many species will go extinct as a result of climate change.
With regards to turtles, a number of key climate change impacts have been identified:
Loss of nesting beaches: Sea level rise from the melting of polar ice is already contributing to the loss of beach and turtle nesting habitat. Weather extremes, also linked to climate change, mean more frequent and severe storms which alter nesting beaches, cause beach erosion, and inundate or flood turtle nests. 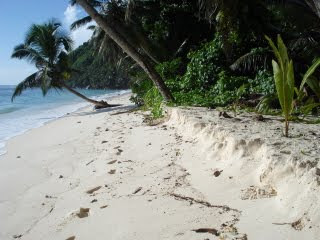 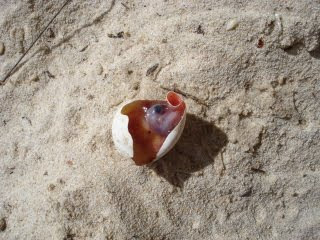 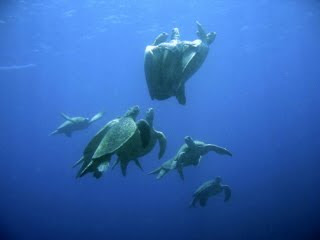 Turtles gather at breeding sites and fight for mates, photo unknown
Change in their geographic distribution: Turtles use ocean currents to travel and find prey. Warming ocean temperatures influence migratory species by altering currents and impacting the distribution and abundance of prey species. This can result in southerly species being found in more northerly regions, well outside of their normal range.

Young leatherback hatchling at the mercy of the current, photo unknown
Loss of foraging grounds: Warmer water temperatures affect coral reefs through coral bleaching which are vital to the survival of species like the hawksbill. 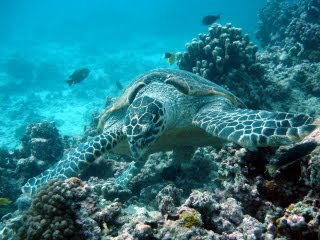 Hawksbill turtle feeding on sponges, photo Pierre Andre Adam
While nothing can be done to stop changes in current flow, we can do our utmost to mitigate impacts to our coastline by making sure there is adequate beach vegetation to minimise sand erosion thus protecting the nesting platform and maximise shade cover to provide cool areas under vegetation to maximise or maintain egg survival rates as temperatures rise. This can be further enhanced through controlled coastal development. On a personal level, everyone should try to reduce their carbon footprint.
Posted by The Marine Conservation Society, Seychelles at 9:47 PM No comments:

I have been working on my family tree and it turns out I am related to Gilberte Gendron and Marcel Mathiot .
Gilberte is my 6th cousin and with the rampant inbreeding in Seychelles (particularly on La Digue) in the 1800’s, it turns out that I am not only related to her through her mother (my 5th cousin, once removed) but also her father (my 6th cousin) - although they themselves are only indirectly related by an ancestral marriage…much to Gilberte’s relief! 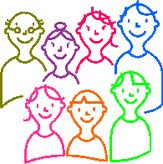 As for Marcel, well he is my 3rd Cousin 3 times removed, which means I am now also indirectly related to Patricia and through them, to their 4 year old grand-daughter, Lucy...a budding turtle fanatic!
This means there are now at least 7 turtle fanatics (including by parents) in the family!

On the down side, many of our common ancestors come from La Digue, so I am a little concerned about the turtle killers (legal or otherwise) lurking in our midst!
Posted by The Marine Conservation Society, Seychelles at 1:56 AM 1 comment: