A Trio of Tiny Turtle Tearaways

Volunteer intern 'Pedro' relates the story of three lucky hatchlings...
Although we’re approaching the end of the Hawksbill nesting season and fewer turtles are coming ashore to lay eggs, this just means it’s about the right time for many of the eggs to hatch. Most nesting happens in the south of Mahe, but yesterday at the fishing harbour in Bel Ombre, three wayward hatchlings were discovered by Marcel, a boat mechanic. Hatchlings usually emerge from their nest at night, because it’s safer then, so seeing them on land in the daytime is unusual. Sitting in the hot sun isn’t good for hatchlings (or for people!), so Tony, the Dive Instructor, placed them gently in a nice cool bucket of seawater to keep them safe while they were taken back to the Underwater Dive Centre. The hatchlings doing laps in their temporary home
Most of the MCSS staff, and myself, were working hard in the office when the telephone rang with news of the find, but since it’s rare to see hatchlings we all decided to take the opportunity to help. David drove Georgia and me to the Dive Centre where we found everyone watching the little turtles swimming around in their temporary home, knocking their beaks and shells into the plastic of the bucket as they followed their instinct to swim out to sea. 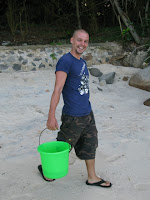 Pedro becomes the turtle carrier and guardian for the afternoon
Having torn the turtles away from their audience, we then drove them north to Carana beach, picking up Gareth and Laura on the way, and trying not to let the water slosh all over the truck. I must make an excellent human shock-absorber, as not a drop was spilled. After locating the hairpin bend at the top of the steep track to the beach (and some excellent truck manoeuvering by David) we selected a spot away from the rock plateau that would have stopped the hatchlings from getting out to sea. 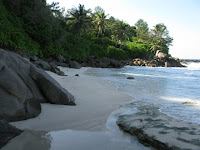 Picturesque Carana beach, the ideal release location
When turtle hatchlings are relocated like this, it’s usual to let them make their own way to the sea, but because they had already done their imprinting walk and then got washed back ashore we decided to release them directly into the sea. As the waves were quite big we had to time it so that the waves didn’t wash the little scamps back onto the beach, so after a wave broke we gently placed them in the water to let the current wash them away from the beach, and waved goodbye forever. 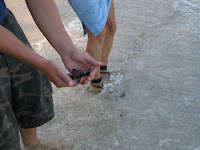 Pedro releases his hatchling, fingers crossed for the little chap!
If they manage to get to deeper water without being eaten by something, the hatchlings will spend the next few years in the open ocean, until they reach an age when they will start foraging from the seafloor in shallower water. It takes around 30 years for Hawksbills to mature to breeding age, so if any of them were female, who knows - they may be back to lay their own eggs in years to come.
Posted by The Marine Conservation Society, Seychelles at 1:33 AM No comments: