Every season, a number of nesting turtles will inadvertently be scared off the beach by over enthusiastic tourists, eager to immortalise the experience with the perfect shot for their photo album... and to make their friends back home green with envy!
In 2004, MCSS created the “Turtle Watcher’s Code of Conduct” with funding from the British High Commission and while these have been widely distributed to tourism establishments located on nesting beaches around Seychelles, many tourist, and locals for that matter, still do not know how to behave around a nesting turtle. 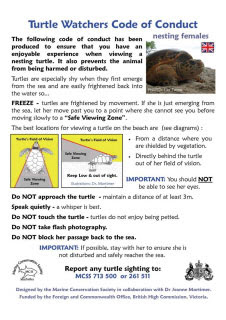 The MCSS TWCC for nesting turtles, courtesy MCSS.
With the recent establishment of the Tourism Police Unit within the local Police Force, these Officers provide a unique opportunity to maximise nesting success while raising awareness about turtle conservation.

MCSS began working with the Tourism Police in the South of Mahé during the 2008-09 Nesting Season, with Christopher Adrianne reporting nesting emergences on a number of beaches and even assisting with a poaching incident. In 2009-10, Andy Agricole and Michael Jacques joined the un-official Turtle Team within the Tourism Police. Other Officers, particularly on Anse Intendance, were also on turtle watch but never seemed to see a nesting turtle. 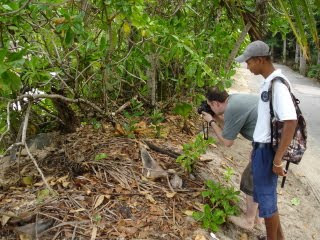 Andy Agricole making sure a nesting turtle is not disturbed by tourist on Anse Takamaka, photo Elke Talma.
Through their tireless effort in patrolling their designated beaches and their enthusiasm for turtle conservation, a number of turtle’s nested successfully this season and hopefully many tourist returned home with a turtle tale to pass on to their friends. 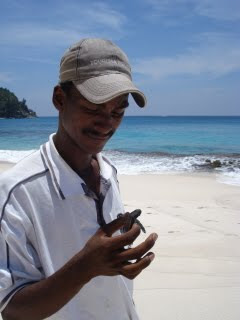 Turtles occur throughout the world’s oceans and while all are considered endangered, some even critically endangered, they are all of cultural and economic importance to coastal populations.
In Costa Rica for example, the “arribadas” of the Olive Ridley’s (i.e. massive nesting aggregations with thousands of females nesting in large simultaneous waves over small stretches of beach), bring families and the local community out for a day on the beach. 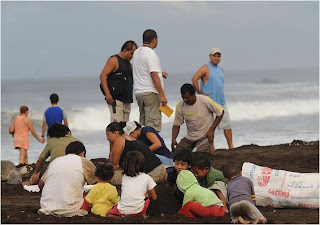 In typical Latin style, duties are delegated for the day’s activities. Women are charged with collecting the eggs, while surrounded by turtles desperately trying to lay their eggs in a limited window of time. The eggs are about the size of a lime, leathery in texture and amazingly tough, allowing them to be gathered straight from the eggs chamber and transported long distances without breaking. 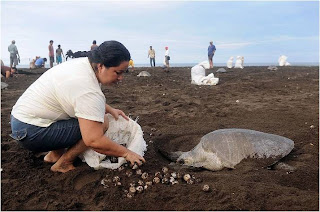 Women dig for eggs
Arribadas are unique to turtles of the Lepidochelys family (i.e. Olive and Kemp Ridley turtles), and seem to be triggered by lunar phases. Generally, they occur around the start of the last quarter moon, but may also take place at any time including the full moon. Two arribadas (first and last quarter) may even occur in the same month and researchers have noted that the size and duration of the arribadas varies between the dry and wet seasons. Those occurring in the dry season of January to April tend to be smaller (approximately 5,000 turtles) and of shorter duration (less than 4 days). In the wet season of May to December, up to 300,000 turtles may lay over a period of 8 to 10 days. Depending on the location, there can be as little as 5 to as many as 15 arribadas in a year.

Once the women have filled gunny bags full of the precious eggs, the men take the bags off to market, where they are sold rather cheaply (less than US$0.01 per egg), for their aphrodisiac qualities .... they are also believed to cure erectile dysfunction! 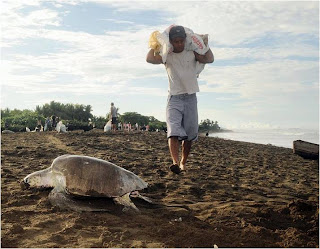 Men carry the heavy load off to market.
Costa Rica is considered one of the best places in the world to witness an arribada, and while one would image this could cause a conflict between eco-tourism and the local culture, measures have been put in place to control the harvesting and also minimize poaching.

Since 1986 turtle eggs have been legally gathered by an organization know as the Association of Integral Development of Ostional (AIDO). The main goal of the exploitation and marketing of turtle eggs by AIDO is to achieve social growth of the community through controlled removal of eggs without compromising the reproduction and conservation of the species. 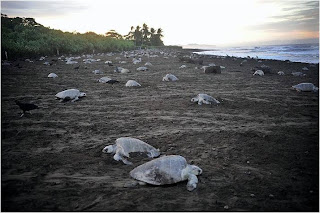 Controlled harvesting reduces poaching and helps preserve the species in Costa Rica.
As eggs deposited by early arrivees were being crushed by the next waves of turtles coming to lay eggs, it made sense to allow locals in this area to remove the first wave of eggs. Scientist also found that eggs laid during the dry season were unlikely to ever hatch due to the heat of the sand, which dehydrated the eggs.

Town’s folk collect and sell the eggs and use the money to help preserve the eggs in the subsequent waves of egg laying. The money was also used to build facilities in town, like schools and a clinic. Some of the money also ends up in the pockets of towns people, providing income where few jobs exist. The collected eggs are sold in bars and stores to meet the demand for turtle eggs and helps discourage poaching of eggs more likely to hatch. By providing a sufficient source of turtle eggs, the price of eggs stays low on the black market, discouraging incentive to poach them.
Posted by The Marine Conservation Society, Seychelles at 4:52 AM 1 comment: