My name is Caroline Baille, I am 21 and I am from France. I am on a master degree of agronomy. I will specialize in marine sciences later on, that’s why, for my internship this year, I wanted to work on protecting marine life, especially on animals like sharks or turtles. I sent a request to MCSS who accepted me on the Turtle Monitoring Program.
I arrived in Seychelles the 3rd of November 2010 and I am here for 3 months. In only 2 weeks, I discovered many things about turtles and about their conservation in Seychelles. 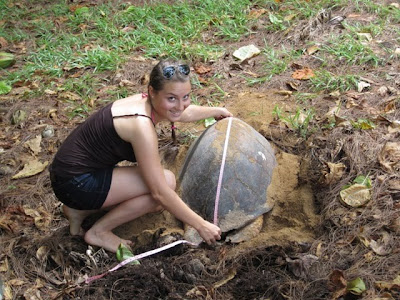 Caroline measuring a nesting hawksbill turtle, photo Devis Monthy
During the day, walking on the beaches looking for turtles tracks is really amazing, especially when we have turtle encounters. After 10 days of turtle patrols, I finally met my first turtles! And it was a very special day because we encountered 5 turtles on the beaches! We observed them, took all the required measures (carapace length,…) or information (time, turtle specie, name of the beach,…) for the research program and finally tagged them before letting them go back to the sea. This is very surprising to see how these animals living in the sea are able to walk on the beach and dig such a deep egg chamber (50cm) with their fins only. This is one of the things that impresses me most about turtles. 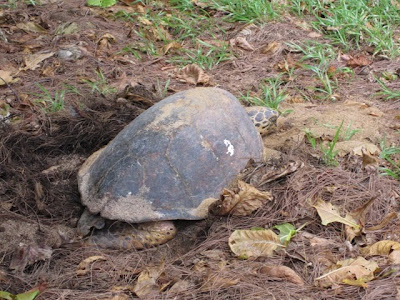 The first of the five turtles, nesting on the inshore side of the road, photo Caroline Baille
Turtles are beautiful animals and I understood that their conservation is very important for the ecosystem and fishing activities: I really feel concerned about it and getting involved in this program as a volunteer is the best experience ever for me, I really enjoy it.
More about the five turtles from Project Coordinator Georgia:
We enountered five turtles, the first one was at the first beach we checked and was on the other side of the road to the beach and not easy to see! She had already dug two nests complete with nest chambers but abandoned them for unknown reasons so she must have been really tired.
While we waited with her, a team of landscape surveyors turned up with machetes and equipment which was worrying initially but they turned out to be really interested so we told them about the laws, basic turtle info and about how turtles are poisonous to eat and how they help the environment. They ended up helping to get her back to the sea after she got stuck in some vegetation which was really good of them. 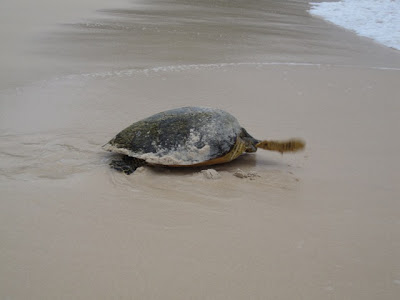 Turtle number 1 heads for the sea after being freed for vegetation, photo Caroline Baille
The second turtle laid at the bottom of an erosion cliff within the tide line so we translocated the eggs, (151 eggs) to the top of the cliff. 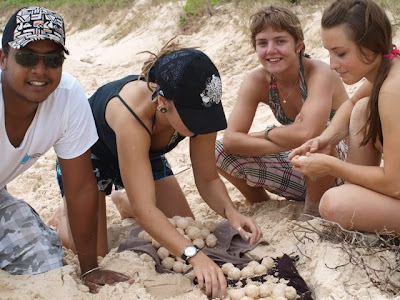 The whole team helps dig-out and translocate the eggs from turtle 2; photo Devis Monthy
Turtle no. 3 was on some rocks and while we were making a plan of action she made a break for the sea and we lost her! On the next beach along however, we encountered a turtle just emerging from the sea so it could well have been our friend from the rocks (turtle 4). On the same beach there was also another turtle already nesting (turtle 5).
Devis tagged this one as well as turtle no. 2 and showed us how the equipment worked. I was supposed to tag turtle no. 4 once she finished laying but she already had tags. All turtles were hawksbills. No. 4 also got stuck under some roots and Devis and Mariska helped to free her. Turtle ID photos were taken for all but turtle 3 which made a very speedy escape indeed!
Posted by The Marine Conservation Society, Seychelles at 1:42 AM 1 comment:

Let me introduce myself. I’m Georgia French, Project Coordinator for MCSS. I have been working here for about three months now and been on many turtle patrols but this one proved to be particularly memorable.....
We were headed to Intendence beach for our usual turtle patrol when we got a call from a Banyan Tree Staff member saying that there had been four turtle emergences on the beach that morning and one turtle was still present. This was great news for us as we haven’t caught a turtle on the beach for a little while and we were beginning to miss them!
We arrived to find a large group of tourists that were being managed by Banyan Tree staff standing well back from the nesting turtle. The intervention by the staff was good to see as two of the other emergences that morning had resulted in the turtles being scared back into the sea by unwitting tourists before they could lay their eggs. Thank goodness the staff were present to correctly manage the enthusiastic group for this turtle!
When we checked her laying stage we found that she had not yet begun to dig an egg chamber so we waited about half an hour for her to investigate the area and pick a spot that she was happy with. 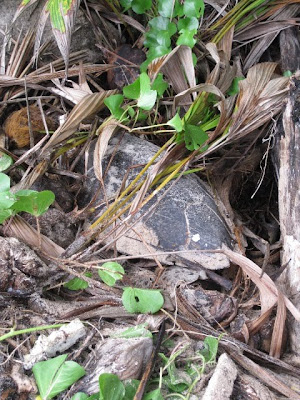 Nesting turtle getting tied up in vegetation trying to find the right spot to nest; photo Caroline Baille
Once she had carefully excavated the egg chamber with her back flippers (I love watching this process, you would never think they could use their back flippers so delicately) I lay down behind her so that I could count the number of eggs that she laid. I think that she may have already nested a few times this season as she only laid 93 eggs. While she was laying, her carapace was measured and she was checked for injuries. She seemed to have a very fresh scrape on the back left of her carapace but it wasn’t a serious injury. Once she had finished laying we left her alone to cover her nest and then disguise it by throwing sand around with her front flippers. Unfortunately she managed to get a front flipper AND her neck well and truly stuck under some roots so we had to assist her in leaving the nest site. 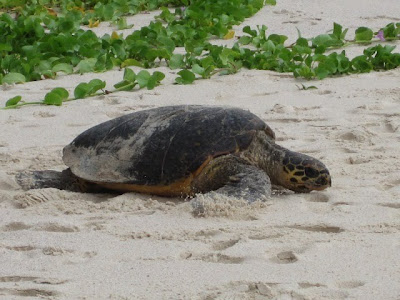 On her way back to the sea at last! Photo Caroline Baille
When we knew she was about to head back to sea, we called over a family that had been waiting very patiently to see her return to the ocean. Making sure that they followed the turtle watchers code of conduct and stayed a safe distance away, the family took lots of pictures and were really happy to have witnessed such a rare and beautiful sight. 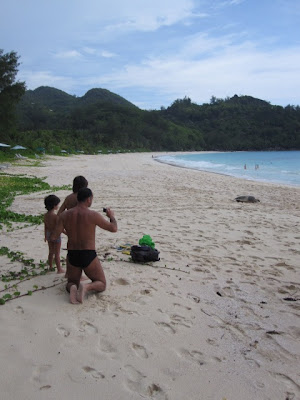 The happy family takes some photos of the turtle as she heads down the beach; photo Caroline Baille
But, once again, our turtle turned out to be somewhat unlucky. On her way over the rocks at the tideline, she managed to fall straight into a turtle-shaped hole! She was stuck fast with only her rear end and back flippers poking out which looked somewhat amusing but was a situation that required rectifying fast! 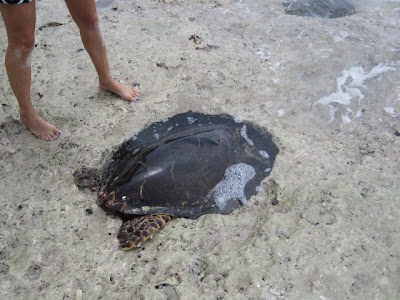 Stuck in a perfectly turtle sized hole! Photo Caroline Baille.
Myself and Devis Monthy used the protruding front of her carapace to pull her out of the hole and finally release her back to the sea. By this time there were a large number of spectators who all seemed very pleased to see this mishap prone turtle finish her trip.
Posted by The Marine Conservation Society, Seychelles at 12:21 AM 1 comment: