As a part of our on-going turtle conservation programme funded by the Mangroves For the Future initiative, we recently ran a survey about peoples perceptions and knowledge regarding Seychelles turtles. The results were very interesting and one output was a targeted awareness aimed at school children.
Devis Monthy in charge of our turtle monitoring was tasked with implementing the project assisted by Georgia French our MCSS Project Coordinator and as Abi March (one of our whale shark programme team leaders) is both a designer and school teacher, she was asked to lend a hand …Abi was more than happy to assist, provided she could piggy-back some whale shark awareness into the project!
Abi came up with the idea of a short turn-around ‘Poster Challenge’ for four schools…. Who could come up with the best awareness posters in just one week!
This was a pretty tight time-line for the kids as well as the MCSS team but this Saturday it all came together and the kids got to show off what they had achieved at an exhibition at the National Library put together by the team along with information about the MCSS turtle and whale shark programmes. 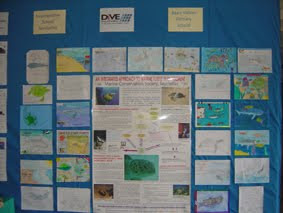 The Turtle awareness info and posters
The exhibition drew a good crowd of visitors from the schools, with their parents and teachers as well as some coverage from the National Press, and most importantly the posters were brilliant!!!
As part of the prize, the winning entry from each school was to be turned into a T shirt design and all compiled as a set of postcards… The winning entries and had already been turned into a first transfer print of the T shirts, to give the prize winners and orders for more are already flooding in! The prize winning entries turned into T shirts
You can’t blame them when you see the designs! 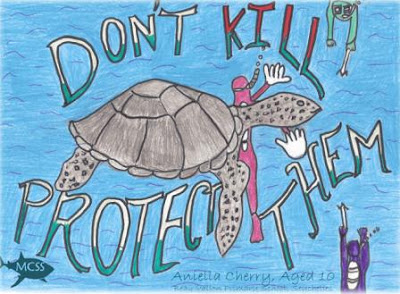 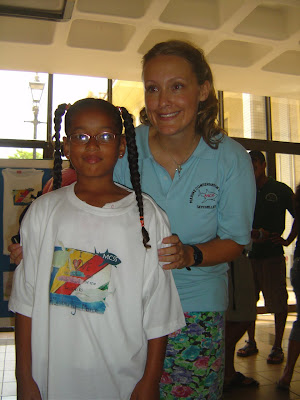 Kimberley wearing her own designed T shirt... in fashionable baggy size with some prompting from Abi!
We will let you all know when the designs are available in their final form… could be a great Christmas present!
Posted by The Marine Conservation Society, Seychelles at 9:00 AM No comments:

On the 24th of September the MCSS office received a phone call to inform us that there was a hawksbill turtle that came up at Anse Marie-Louise. Abi March and Devis Monthy, members of the MCSS crew set off to give a helping hand to the staff of the Anse Forbans Chalet.
They made a very good job of making sure that the turtle was not disturbed and returned back to sea in the best condition… Well the same condition that she was when she come ashore but just a bit lighter.
She tried to make a first nest but to no avail. Fortunately on the second try she was successful.
The MCSS crew arrived there a little too late because she had already gone back, but our trip was not in vain… Where she laid her eggs was not in the best location so it had to be relocated to somewhere closer to the chalets. 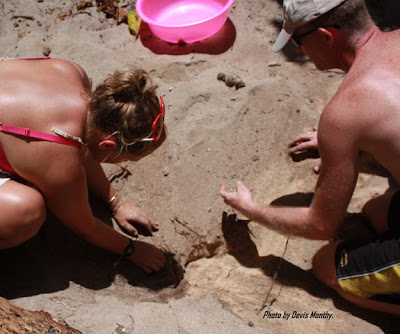 Abi and a hotel guest carefully start to excavate the nest to recover the eggs, photo Devis Monthy
She had laid in a quite busy activity area (the middle of the car park!) and without relocation we can safely say that it would not have survived to. A wooden log was placed in front of the nest before we arrived so that no one would park their car there or start a picnic! 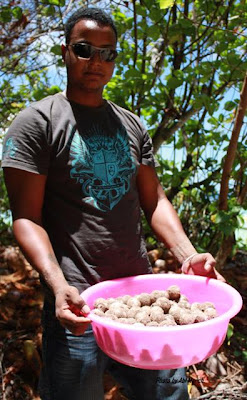 Devis with the first load of eggs for relocating, photo Abi March
She had quite a load to release that’s for sure… 182 eggs had been laid. Unfortunately 4 eggs were damaged in our attempt to move the eggs but four is a small loss, compared to 182 if we hadn’t relocated them. 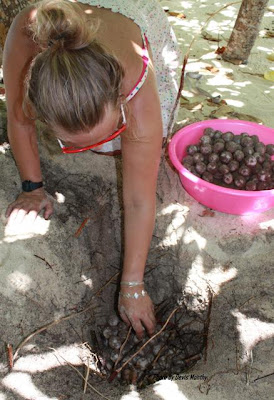 Abi replacing the eggs in the new nest, photo Devis Monthy
So we can say that the relocation was a success, now we have to wait about two months for us to see the fruit of our labor (the turtle and the relocation crew). 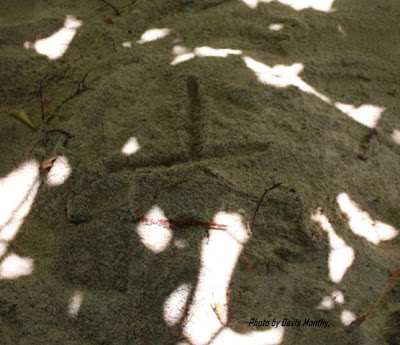 Our greatest thanks Brigitte the owner of Anse Forbans chalet, Mrs.Mathiot, and the guest at the chalet. For without their help, their appreciation for this species, we would not have been informed of the turtle emergence and it could have been one more lost nest.
To you all keep, up the good job…
Posted by The Marine Conservation Society, Seychelles at 12:14 AM 1 comment: