Another contribution from Kristina our MSc student...

You remember there was a huge green turtle track on Grand Police? Just about two weeks later we had another one coming up; and this one did lay!! =) Plus, someone already saw the body pit and marked the area as a turtle nest. So generous that someone should put palm leaves around the body pit and hang a paper on one pillar of the shelter to warn that there is a nest. In fact, this was really good because it might make people more careful around the area but it does also mark the body pit as the nest instead of the actual nest. So, if some stupid people would decide to try and dig for eggs of harm the nest otherwise, they would only find sand. And maybe some crabs =) 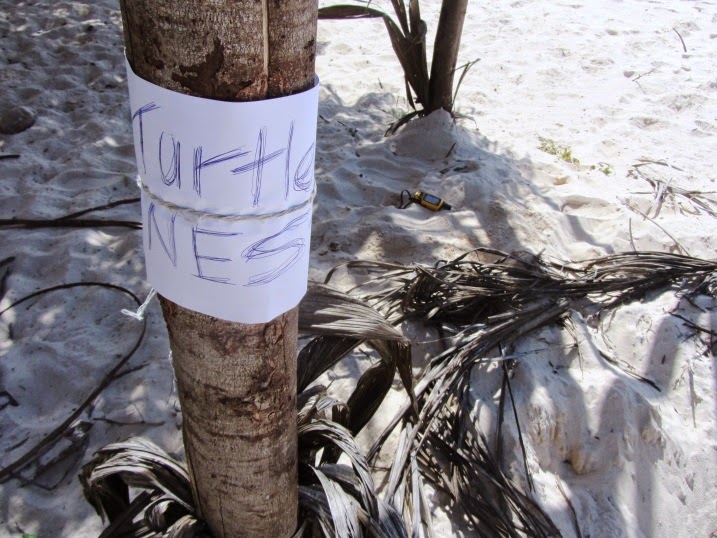 The tracks were still visible and to be honest, the up- and the down-track were super close. The turtle must have just come up, dug and gone straight back down. Per se, this sounds logical and I didn’t really think that it was weird. BUT: greens are not hawksbills. That’s what I learned that day. Usually, green turtles will walk quite some way on the beach, make a lot of body pits, dig the nest, camouflage it really good, make another body pit and then go back down leaving a huge mess behind. This is why Vanessa first thought that she did not lay. But in the end it seemed very likely and we think that the nest is just next to the body pit (on that image above it would be to the left under the shelter). The sand showed all the characteristics; it was loose and looked like it has been recently moved. 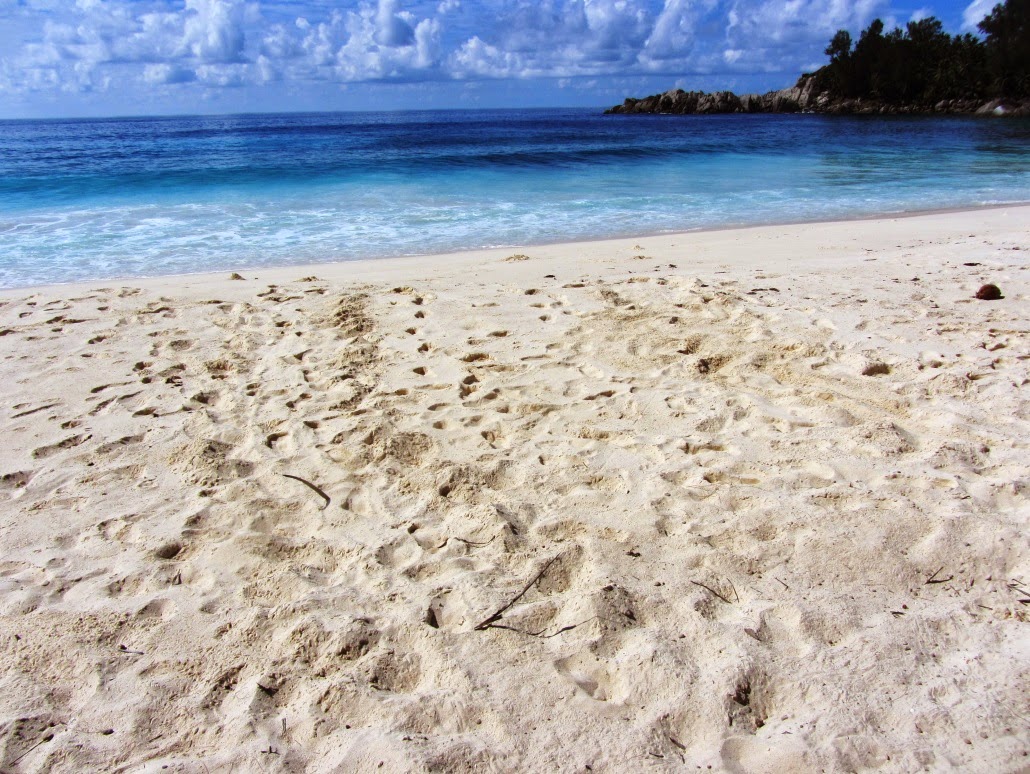 The green turtle tracks, obscured by lots of human footprints

Can you make out the tracks on the picture? They are still visible. We assumed that the turtle came up one to two days prior to our patrol because they are visible but clearly not fresh anymore and there were a lot of human tracks around and over it. If tracks are quite fresh, it also helps to look where they start because that will be the water line at the time of emergence/exit. Then you can compare that with the current tide line and the tide table to get a rough time of emergence.

Posted by The Marine Conservation Society, Seychelles at 12:44 AM No comments:

Nearing the end of the season

It has been way too long since the last blog entry! Time is just flying by.

However, today I am gonna take some time to get you up to date though you didn’t miss so much. Here on Mahe the nesting season is now pretty much over. Usually, hawksbill turtles will come from October to January though there might always be some early birds and some late runners as well. This year, we still had some turtles coming up until mid-February!!

Most of the late ones were seen on Intendance which is the beach by the Banyan Tree Hotel, but we did have some on Grand Police and Bazarca as well. On Grand Police, we also had a huge green turtle in this period. This is not as special, because green turtles lay all year round, but is was enormous even for a green. We measured an average track with of 120cm! :) And the body pits she dug, Oh my gosh.. so huge and deep!! It was amazing to see. In fact, it has been so overwhelming that I forgot to take pictures, which is really not like me. Sorry for that! Well, just imagine two huge holes in the ground that you could easily fit in and that’s what she dug. Unfortunately we could not find a nest, but green turtles are very good in camouflaging so that I’ll still keep an eye open around that area.

But enough about tracks, we had some hatchlings as well. Sooooo cute =) These are getting less and less because a lot of the nests have hatched already, but there still have been some in February and March. And yes, I remembered to take some pictures this time. There was one nest on Anse Corail where the hatchlings were still there. In fact, there have been so many of them that we needed to put them back in and leave them though not before taking a picture for you  :) 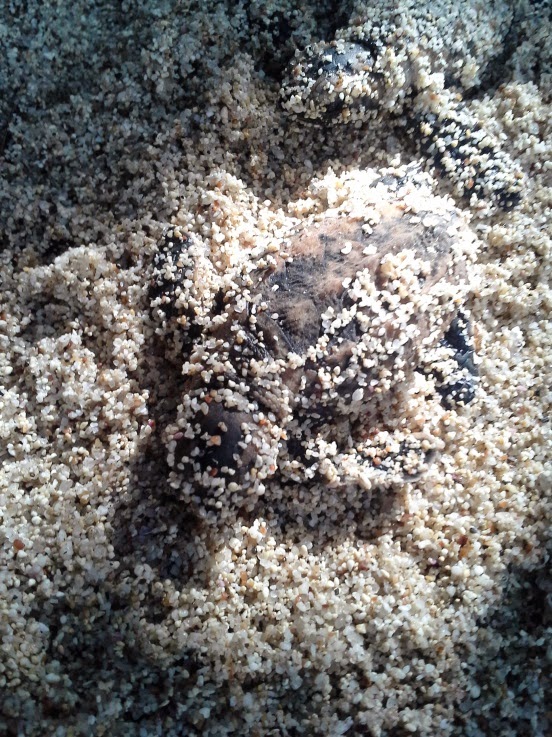 Aren’t they the cutest?
Anyway, it could have been that the hatchlings were waiting under the sand for a good opportunity to try getting into the sea. Even though the nest was in the shade, Anse Corail is a very hot beach and the sun might just have been too much. The hatchlings will notice such circumstances and wait for the sun to go often only leaving the nest at night. Savi and Alvine had to put all of the little hatchlings back into the nest and cover them up. And I can safely report that we came back after the weekend and all of them seem to have been able to make it into the ocean!! Happy endings do exist :) 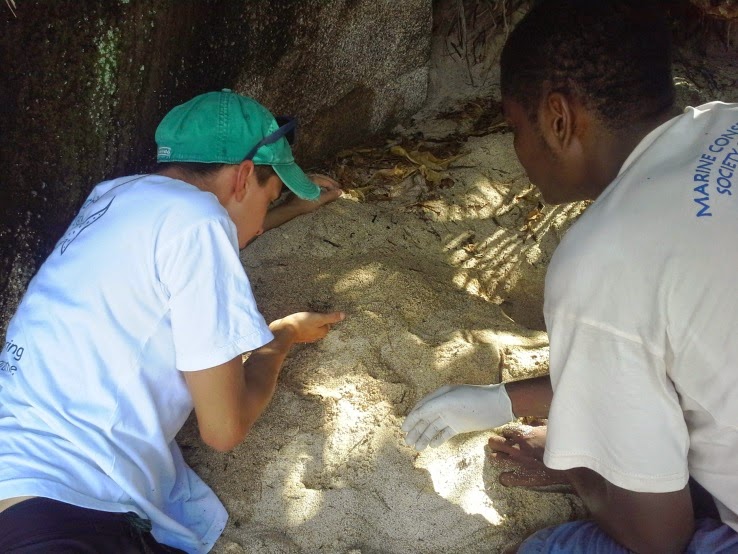 Savi and Alvine covering the nest back up

Posted by The Marine Conservation Society, Seychelles at 4:40 AM No comments: