A belated Christmas gift for Robin from MCSS

Shortly after Christmas, Elke received a call from an exited Robin about finding a hatchling on Petite Anse, West Mahé. Robin Bhugaloo is the “Turtle Manager” at the Four Seasons Resort, but as there has been no nesting activity on the beach this season due, most likely, to the increased human presence from the Resort, he has had very little to report... a hatchling, therefore, was a major find! 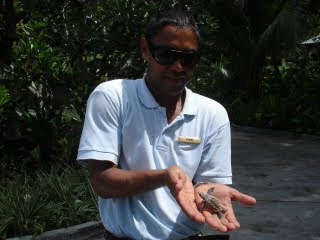 Robin Bhugaloo proudly showing off his find, photo Elke Talma.
Unfortunately, the hatchling which had emerged from a neighbouring beach and was washed ashore by strong currents was very weak and died shortly after. Its death, however, was not in vain as Elke was on hand to collect a DNA sample for IFREMER. 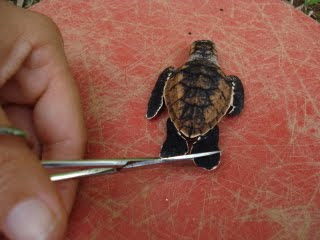 Elke collecting DNA from the dead hatchling, photo Elke Talma.
Two days later, during regular beach patrols in the area, Elke dug up a recently hatched nest with 10 stragglers. As Robin was a short drive away, the hatchlings were Robin’s reward for diligently patrolling Petite Anse since October 2009 to no avail. By the time Elke arrived at the Resort, word of the imminent release had spread like wildfire and a large group of tourist and staff had gathered to wish the hatchlings a final “bon voyage”. 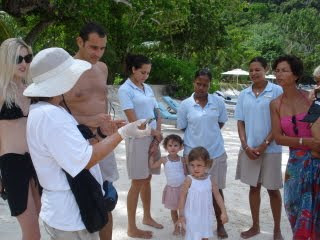 Clients and staff from four Season resort, treated to an impromptu lecture on turtle conservation by Elke, photo Robin Bhugaloo.

Posted by The Marine Conservation Society, Seychelles at 10:07 PM 3 comments:

Researchers from IFRMER and Kelonia using variations in the mitochondrial DNA patterns in green turtles from the Southwest Indian Ocean have revealed two distinct genetic populations within the region – namely the Indo-Pacific turtles and the Atlantic turtles. 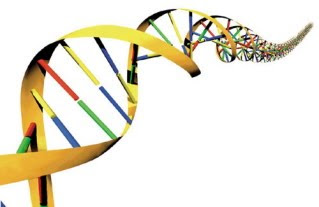 Previously, it was believed that the Cape of Good Hope, at the tip of Africa, acted as a natural barrier between the Indian and Atlantic Ocean populations. 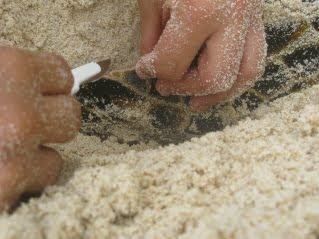 A little nip and tuck, photo Catarina Schlott
Since the beginning of the 2009-10 nesting season, Elke has been collecting turtle DNA samples on behalf of IFRMER. To date 14 Hawksbill, 1 Green and 1 Olive Ridley tissue samples have been sent to Reunion for analysis.

Over the course of the nesting season an additional 35 Hawksbill samples have been collected from both nesting turtles and dead hatchlings and embryos dug up from nests. Samples have also been taken from 2 dead adult turtles found by MCSS during the season. 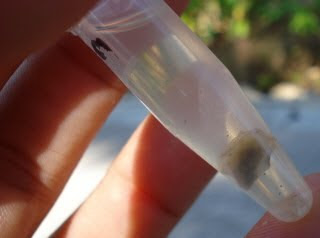 DNA can help us better understand the population distribution, photo Elke Talma
Posted by The Marine Conservation Society, Seychelles at 3:17 AM No comments:

A festival was organised in November 2009 to celebrate the 15th anniversary of the Seychelles Wildlife Club, and Elke volunteered to talk to club members about turtles.

Armed with a turtle poster from Kelonia, Tiny the inflatable turtle, lots of informative turtle leaflets, some drawing material and the “pièce de résistance”, Isabelle the terrapin who had been rescued from Anse Forbans, Elke was ready to take on the challenge of keeping a group of over 15 kids entertained for over 2 hours!
“Turtle Time” started with a question and answer session entitled “Who’s who in turtle land”, using the turtle poster donated to MCSS by Kelonia. It was clear that, despite never having seen a live turtle, the kids knew their stuff, leaving Elke to ask more challenging questions.

When it came to turtle protection laws, Elke was pleased when her avid crowd of turtle fans suggested that poachers should be locked up for 15 years for killing turtles, as opposed to the 2 years currently imposed under the Seychelles law. 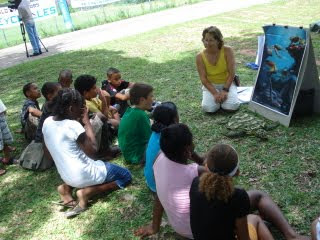 Elke and her avid group of turtle fans, photo Michelle Martin
The next session entitled “Shush! Do not disturb”, was to teach the kids the MCSS Turtle Watcher’s Code of Conduct and Tiny the inflatable turtle was key to this role playing exercise. By the end of the morning the kids, knew the Green Line number (72 21 11) off by heart, and promised to stay with a nesting turtle until she made if safely to the sea ... if they ever saw one, that is! 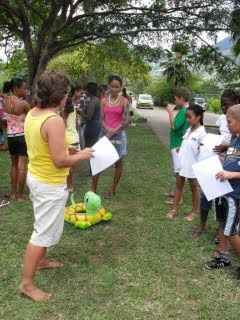 “Shush! Do not disturb”, photo Michelle Martin.
To round off the morning activities, Elke shifted to the main attraction ... a live terrapin rescued during a recent turtle patrol and, at the time in quarantine, before her release in the Banyan Tree Resort’s Wetland. The session entitled “Meet Isabelle, the terrapin” gave the kids the opportunity to, not only learn more about terrapins but also to see how conservationist can help protect endangered animals through their work.
Under Elke’s close supervision, Isabelle was photographed, weighed and measured by the kids, much to her annoyance, giving the kids a taste for what they could be doing, should they eventually decide to work in environmental conservation. 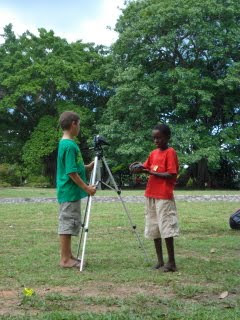 Isabelle making her movie debut, photo Elke Talma
The morning’s turtle activities concluded with a session in which the kids could paint or, for the more talented artists, draw some turtles to show their parents what they had been up to that morning. 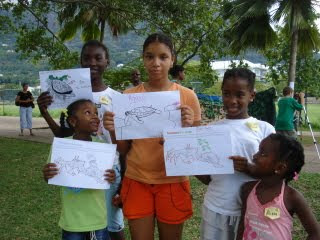 Turtle masterpieces by budding artists, photo Elke Talma.
Posted by The Marine Conservation Society, Seychelles at 6:01 AM No comments: 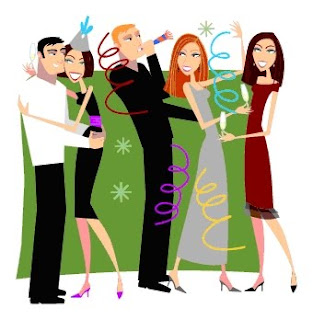 For the those of you who may regularly log onto the MCSS turtle blog, you may have noticed a decided lack off activity on the site during January. While Elke continued to write blogs, David was in Djibouti chasing whale sharks . With limited internet access, he was unable to post any of Elke’s blogs for the period he was away.

Our apologies....
Posted by The Marine Conservation Society, Seychelles at 5:59 AM No comments: