ISS students to the rescue...

Our work-attachment students from the International School Seychelles were a part of a green turtle nest relocation this last week, and spent some considerable time helping to move the eggs to a safe location…
It was the first of the six beaches where we had found a green turtle nest. Unfortunately, it was situated near the shore line at Anse Grand Police where it was in harms way. Knowing that the tide would come up, it was critical that we had dig up the nest and relocate it into a safer place. After an hour of digging in all of the wrong places, Uzice finally came across a broken green turtle egg shell which gave us a clue that we were close. Digging in that direction, we suddenly touched upon the green turtle nest. 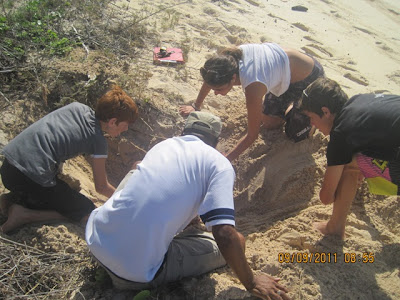 The team carefully excavate the area looking for the nest
By highlighting a dot on the top of every single egg, we were able to know the right way up before being carefully removing each egg. Once all 76 eggs had been placed on a plastic carrier bag, they were transferred further up the beach, away from the upcoming tides. Carefully bringing the eggs to the new location which was naturally protected by a sand bank, we gently placed them down before starting to dig the new hole, which had to be dug exactly to 82 cm as the nest environment had to be kept accurate.
Once we had dug the hole to the right size and depth, we passed the slightly indented egg shells (the last out of the nest) and put them in first. Then we put the undented shells in being careful to put them the right way up. 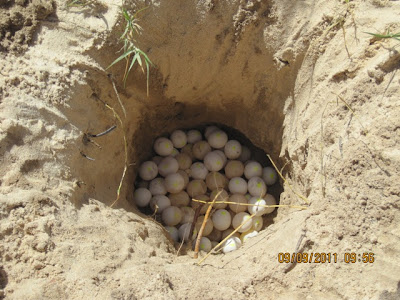 The translocated eggs in their new nest
We covered the egg chamber with sand and lightly patted it down so as not to crush the eggs, and then we marked the nest with a marker and took an accurate GPS reading to ensure us that we could easily relocate the nest if needed. 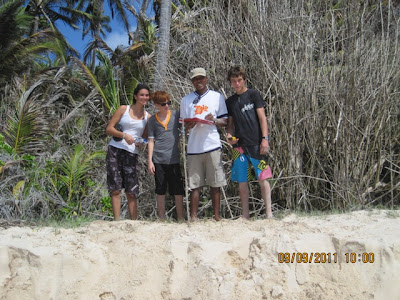 The completed nest and triumphant team (less Laura who took the photos)! 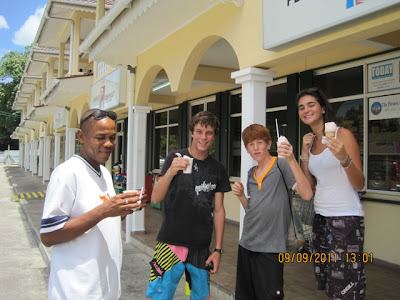 A well earned ice-cream on the way back to base!
Posted by The Marine Conservation Society, Seychelles at 8:25 PM No comments:

Our Maritime training Centre Students, Dainise Quatre and Rebecca Hoareau, are fitting right in with our monitoring programmes and picking up the basics quickly, here's their short intro to some of the activities they were involved in this last week....
On Tuesday 6th of September 2011 at around 7.30 am, we went for our first turtle monitoring walk in the south of Mahe. It was a very sunny day. As you may know, we had to monitor 14 beaches to see if there were any turtles, nest and tracks.
We were very excited because it was our first experience of turtle monitoring. We were accompanied by Uzice and Laura. At 8.13 we arrived on our first beach which was Anse Parnell, and then Uzice explained to us about the turtle code of conduct and how to fill the turtle monitoring form. The last beach was at Mme Trojans. 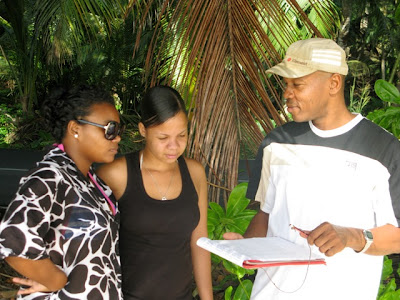 Uzice explains about turtle monitoring and the code of conduct
Unfortunately, we patroled all the 14 beaches without seeing any turtles, which we were looking forward to, especially the two types, hawksbill and green turtle also the turtles nest here, so we were hoping to see their behavior and tracks. 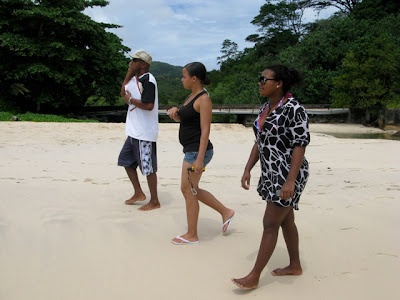 Uzice, Dainise and Rebecca striding out across one of the 14 beaches....
We discovered that there were a lot of dog tracks and some litter that has been washed on the beach by the waves. Even though we did not encounter any turtles on that day, we enjoyed and learned about a lot of beaches that we had never known existed here on Mahe. 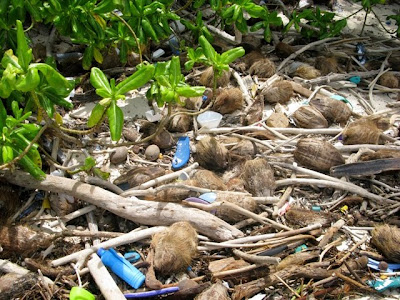 No tracks but lots of litter..... where are all the right flip-flops?
Were hoping that during our two months of work experience here at MCSS, we will be able to encounter a turtle nesting.
We wish that the public would be more concerned about preserving these species, especially stop destroying their habitats and throwing litter around! 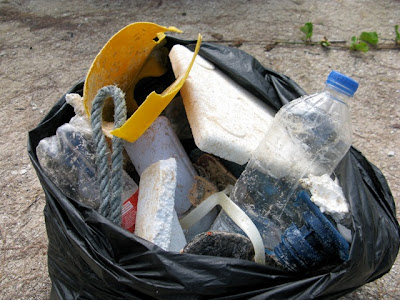 At least the beaches are cleaner after an MCSS turtle patrol!
Posted by The Marine Conservation Society, Seychelles at 8:10 AM No comments:

MCSS Senior Researcher Laura Jeffreys describes the discovery of some of Seychelles rarest turtles....
For some while now MCSS have been implementing a project funded by Mangroves for the Future on protecting coastal bio-diversity. As a component of this, we have been searching the wetlands, streams and freshwater ponds around Beau Vallon, Mahé for native mud turtles. 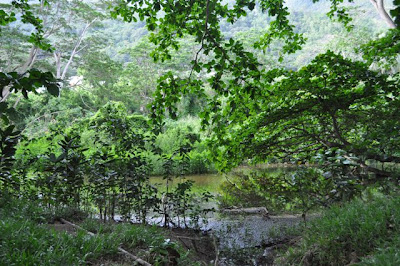 One of the BeauVallon wetland areas, ideal mud turtle habitat...
The search commences every evening just before dusk when we ‘the MCSS team’ place a modified traditional Seychellois fish trap in a freshwater pond/wetland. To encourage the mud turtle into the trap, a tin of tuna in oil is placed inside. The oil helps the smell of the tuna to carry across the freshwater.
Gareth Jeffreys has the important and dangerous role of placing the fish trap. This involves securing the fish trap to ensure it is able to float in a set position whilst still providing air to the mud turtle should they enter the trap (as they require air to breathe). The dangerous element is that we like to place the fish trap out of sight to prevent it being visible to passers-by and on this occasion meant that Gareth had to balance precariously on an old rotten fallen log. Gareth successfully balanced himself and has yet to experience falling in!
As usual, we patiently wait overnight (as does the mud turtle should it have entered the fish trap). At 6am, we wake up eagerly with the hope of a mud turtle. Gareth, once again expertly balances on the log to retrieve the fish trap. Abi March and myself wait in anticipation for whichever comes first: either the first sighting of the mud turtle through the fish cage; or the confirmation call from Gareth. We both glowingly received Gareth’s verification that we had a small crab and a mud turtle. The MCSS Team were all particularly delighted as during our journey to the freshwater pond, Abi had predicted either three mud turtles or none!!! Obviously, we hadn’t liked the sound of these odds. Thankfully, Abi’s prediction was wrong. 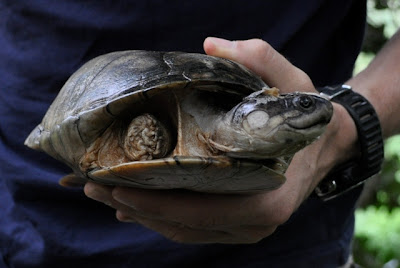 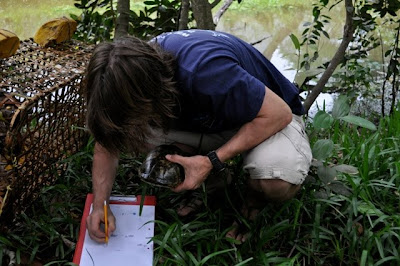 Gareth taking note of Gold Finger's vital statistics
In order for us to be able to tell that we have already taken this mud turtle’s measurements, we marked him with gold nail varnish before releasing him back in his pond to help us ID him in the future, hence the name Gold Finger! 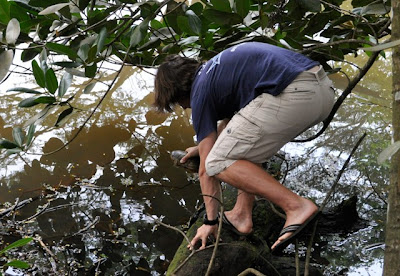 Gareth releasing GoldFinger, without falling off the log!
Although protected by Seychelles Law, the population is deemed to be decreasing and threats to the species include habitat loss through drainage of wetlands, as well as reduced quality of habitats due to pollution and rubbish dumping. Unfortunately, the location of where we found Gold Finger appears to be a dumping ground for disused household goods like fans and even a washing machine.
I’m not sure if I have successfully described our delight but to provide you with some context may help. We were particularly ecstatic as the yellow-bellied mud turtle is native to Seychelles and is critically endangered: “...endemic to islands in the Seychelles. It is found on Mahé, Cerf, Praslin, La Digue, Fregate and Silhouette islands… In 2002, the total population was estimated at less than 100 adults, distributed throughout six isolated populations” (IUCN 2011).
As you may now appreciate, we were a very happy MCSS team knowing to have found one yellow-bellied mud turtle, Gold Finger, from an estimated population of less than 100!
Post Script: Another two yellow bellied mud turtles were captured from the same site two days after ‘Goldfinger’, one of which was over 1.5cms bigger than Goldfinger... so that's three out of the expected population of 100! 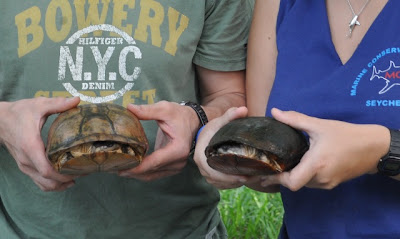 The Mystery of Betty May Be Revealed

In December 2009, MCSS deployed two satellite tags on nesting turtles in the South of Mahé; the turtles were named Betty and Wilna after the two volunteers from WCS who assisted us in the tagging operation. 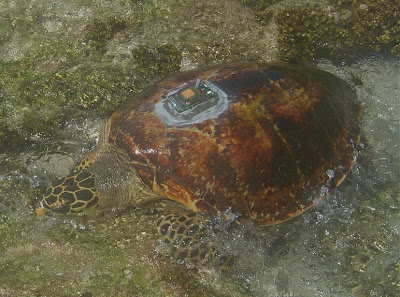 Betty heading back out to sea with her new satellite tag in December 2009
Wilna headed North East and found her foraging ground some 100km from Mahé, while after only two weeks Betty, went missing in action!
We were still in contact with Betty’s tag for several weeks, but the signal was too weak to get a good fix on her position and we suspected that Betty has been killed by poachers, with her carapace dumped in the bushes (hence the weak signal) somewhere in the South of Mahé.
On the 7th of September staff from the Department of the Environment found a badly damaged Mk 10 AF tag among the rocks at Anse Bazarca. They brought the tag to MCSS and we have been able to confirm the tag number as being Betty’s tag… 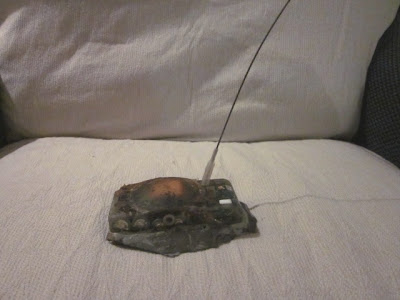 Betty's tag recovered in September 2011, a lot the worse for wear...
While one end of the tag has been badly damaged, probably by the blows of a machete, the circuit board and memory of the tag appear to be intact and so we may yet find out what Betty was doing in her last few weeks of life before succumbing to one of South Mahe’s turtle poachers…. 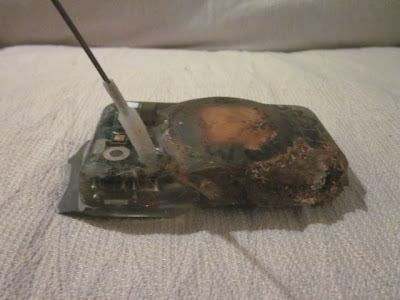 The tag was badly damaged but the memory chips seem to be intact....
Watch this space for further updates!
Posted by The Marine Conservation Society, Seychelles at 7:50 AM No comments: