The good and bad side of the rain!

Monday 15th February was still an amazing day for me despite the heavy rain. In the morning, I saw a turtle who was covering her nest. She was very big, her carapace length was  84cm and the width was 73cm. Vanessa and I, watched her until she went back to the sea. It was another amazing moment with the turtle. I am so lucky, because in the end of January it is generally the end of the nesting peak season, I never thought we would still be having encounters in mid February!!

Then, in the beginning of the afternoon we saw a hatching on Anse Intendance. Johnny and Holly (my colleagues) have seen a little depression and when they touched the sand, they could feel some movements. So they began to dig and they found on the top some little turtles. They didn’t want to dig the entire nest, because the baby turtles have to come out alone without help. So we were waiting for maybe 30 minutes, and when the heavy rain came (the temperature outside was now lower than the temperature inside the nest) all the turtles came out of the nest. They were very fast. In total, we had 141 baby turtles. Even though we were very wet (like we go out of the shower) it was a beautiful moment. What an amazing day, a big turtle and lots of baby. What more could you want?

Today, in Anse Corail, we saw a track of a Hawksbill turtle. I think this one was very confused because of all the obstacles and because of the hard ground. She did 5 body pits and she finally laid near a shelter….
We were also sad, because since Monday, in Seychelles, there was
very heavy rain and some flooding, and in Anse Corail 3 nests were destroyed: 2 flooded and one because of the erosion cliff (when we arrived, we found a cliff into the nest… So Vanessa moved 60 eggs away but we are not sure that the turtles will hatch because of all the water and because the eggs were not in the sand anymore….

Lea from France.... the hatchling magnet!!

My name is Léa, and I am from France. I came here on the 13th January to do my internship for my second year of my masters, to study the nesting behaviour process of the hawksbill turtles. I will stay at the office until the middle of June. So now, it will be me who will continue to write the blog.
When I first arrived for the two first weeks I was at the office in Beau Vallon and for the past three weeks I’ve been working in the south as a member of the MCSS’s team. 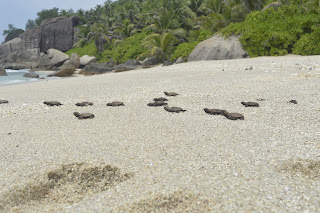 The 15thof January was such an amazing day for me, I came from Beau Vallon to do the beach patrol and in Anse Corail, Vanessa told me to dig a nest which was due. During the 5 first minutes, I found nothing… but after that, I began to see 3 baby turtles, I was so excited. Vanessa told me that we have to dig up the nest entirely because; he was very far from the sea and completely in the vegetation with lots of roots and obstacles in the nest itself. In total, we put 224 turtles in the sea. We were very lucky because it was a very big nest. 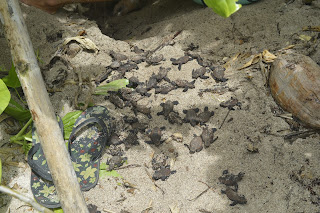 My first day in the south (the 21th January) was just amazing because I saw all the laying process of the Hawksbill turtle. Vanessa and me, stayed with the turtle for 2h30 hours, she was very slow and very tired, but it was a wonderful moment for me. It was the first time I saw a turtle laying, so you can imagine how excited I was!!

On the second week, on Monday and Tuesday, Inga, Laura and I did the beach profiling. It’s only to measure the erosion on the beach. We have to do it, each month in all the 6 mains beaches. It was easy, but it was very long and with the heat it was sometimes hard but we managed to do it very well. 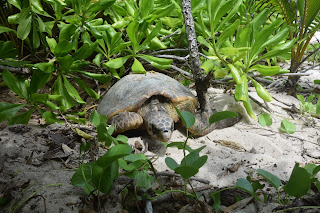 Otherwise, Inga and I were very lucky because on the Sunday 31th of January evening, just after we ate our dinner, the staff called us, because there were hatchlings on the beach near the villa. When we arrived, we found 16 baby turtles near the light, which was in the other direction to the sea. They wanted to cross the road. We know that once on the surface, newborns head to the sea, the brightest spot. But when there are lights, they are more attractive by the light rather than to the sea. So, we managed to be very fast, and didn’t forget any of them (because they were everywhere), so we put all the baby turtles in my bag to release them afterwards into the sea. It was a special moment, and we were very excited. The security guy who was with us, told us, that he already put more than one hundred babies into the sea, because he found them everywhere near the villa. We were very happy to save the life of these cute baby turtles.
Monday 8th February, we were on the patrol and in Anse Corail, Vanessa saw a depression in the sand. When we arrived, we had lots of hatchlings in the hole, and they could not get out because the hole was too deep, so we took all of them out of the hole. In total, we had 63 baby turtles who were still in the hole and in total 137 eggs shells. So lucky to see that! 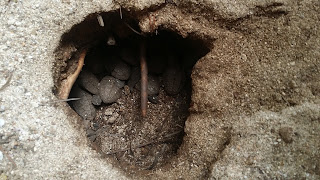