Turtle in a hurry

As a child I remember reading stories about wise old turtles, but wisdom is not an attribute that the turtle always displays! When nesting, a turtle is usually constantly on the lookout for danger and can be very picky about where she will lay her eggs. This was not the case last week for a turtle nesting at Petite Marie Louise.
Now this was not an inexperienced young Turtle, as she had some scratches and damage to her shell suggesting that she had been around a bit. She must have nested many times before, but on that day, she had barely reached the high water mark when she made her first attempt. The sand was of course too damp, and so the nest kept collapsing. She moved on, making two more attempts to nest, with the last attempt being made in the sandy soil, amongst the roots of nearby coconut trees. 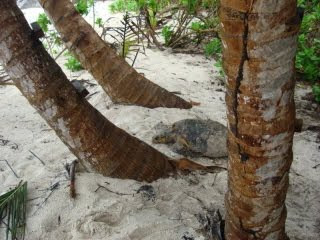 All the time, she appeared to be in great haste working hard to dig out her nest. The roots of the coconut tree impeded her progress somewhat, until in pity, Marcel reached under her from behind and, out of sight, helped by surreptitiously removing a few of the roots. Obviously she was not wise enough to know that less haste means more speed!

She dug a rather shallow egg chamber and then did not straddle it properly, dropping her eggs, not in the chamber, but on the nest wall where they piled up. Once again, Marcel reached under her and rolled the eggs to where they should have been. She seemed totally oblivious to Marcel’s presence but that was because he kept absolutely quiet and completely out of her line of vision. It also helped that turtles tend to go into a sort of trance and will remain so until they have finished laying. 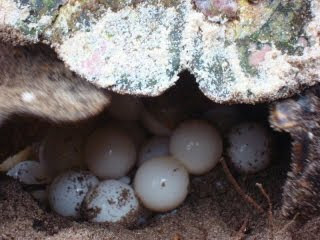 Eggs piling up along the side, photo Marcel Mathiot.

Having laid her eggs, she spent considerable time covering them and flattening the sand down with her flippers, turning around and around not quite on the spot until satisfied that there was no indication of where the nest actually was. She spent a long time doing this, during which, a young man and his dog came onto the beach. He quickly put on flippers and entered the water, probably to look for octopus.

The dog, however, remained on the beach and although aware of the turtle, was apprehensive of Marcel and so kept its distance. After the turtle had returned safely to sea, Marcel, concerned that the eggs were rather shallowly buried, added more sand and tidied up the nesting site, then he too had to leave.

I wonder why this turtle was in such haste. Maybe she had been thwarted in her previous attempts to lay her eggs and just couldn’t wait any longer.

… News from Pat and Marcel.
Posted by The Marine Conservation Society, Seychelles at 6:41 AM No comments:

Marcel was quite pleased with his clean up of the beach at Petite Marie Louise, especially as this was followed with a successful turtle nesting. He has been patrolling Petite Marie Louise almost daily, so imagine his concern, when he was told that a turtle had been rescued from a pit above the high water mark there.
He remembered that a while ago someone had actually searched for treasure at Petite Marie Louise, leaving several large holes behind. These holes are well above the high water mark, too far you would think, for a turtle to reach. You’d be wrong! 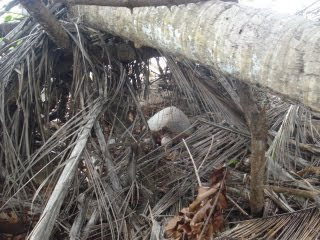 Turtle struggling to find suitable nesting site in the dense coconut debris, photo Elke Talma
An enterprising turtle did find the hole, but sliding into the hole was obviously easier than climbing out. She probably spent the night there, for when found, she was dirty and exhausted according to the local fisherman who found her. It took some effort to pull her out of the hole and drag her back onto the beach, but she did get safely back to sea. Marcel spent the rest of that afternoon making the pit safe by erecting a barrier to prevent another turtle mishap. 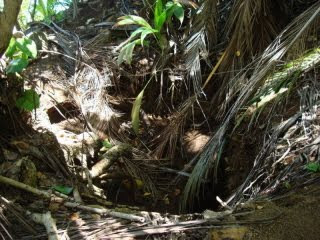 Hole from ex-treasure hunting venture proved to be a trap for unsuspecting turtles, photo Marcel Mathiot
A few days later, he noticed that someone had obviously enjoyed the cleaner beach, in spite of the rain, as they had cut some palm fronds with which to build a shelter. These they left behind, stacked in a neat pile but creating a barrier once again which blocked off access to the turtle nesting places. Marcel removed the barrier!

This beautiful little beach gets a lot of attention for such an isolated spot. Sometimes it is not the right kind of attention. During a routine patrol once more the unexpected happened. While searching the beach for turtle tracks and finding none, conversation and all attention turned towards the pit at the top of the beach. The tale of the unfortunate turtle trapped in the pit was recounted and so the pit was inspected. At first glance there was nothing unusual to be seen and then sharp eyes and keen noses detected more than the presence of palm fronds.

Lying in the pit there were in fact, in excess of a dozen empty jerry cans. Their contents, diesel oil, had been poured away, possibly over the side of a passing fishing boat, and above the pit partly, hidden behind a young palm tree we found a small cache of Turtle and Dolphin meat, salted and ready to be collected by the prospective person or persons. Just as we were feeling good about this turtle season too! Hawksbill turtle safely making her way into the sea, photo Marcel Mathiot
Sad as this was, there is still much to feel good about, for throughout the local community, there has been a lot more positive interest in the conservation of the turtle. We might be moving forward a tad slowly, but we are going forward and we will succeed.
… News from Pat and Marcel.
Posted by The Marine Conservation Society, Seychelles at 3:00 AM No comments:

The Marine Conservation Society Seychelles (MCSS), in collaboration with the Kelonia Marine Turtle Observatory in Reunion, Ministry of Environment and Alliance Francaise, are organising a public presentation on “Using images to help conserve endangered marine life”. 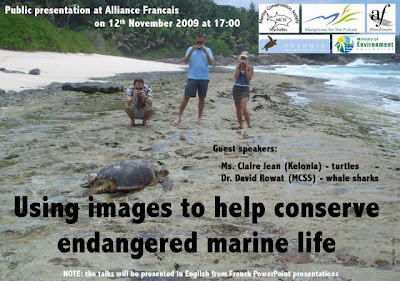 ........You are all welcome to join us!
Posted by The Marine Conservation Society, Seychelles at 8:08 PM No comments:

The Marine Conservation Society Seychelles (MCSS), in collaboration with the Kelonia Marine Turtle Observatory in Reunion and Ministry of Environment, are organising a scientific presentation on “Using images to help conserve endangered marine life”. 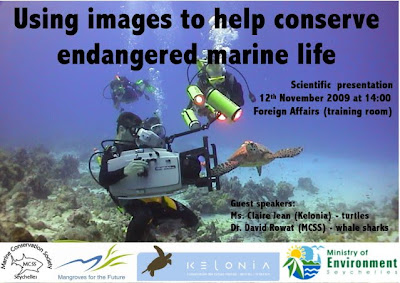 This workshop, which is being held at 14:00 on the 12th November in the training room at Ministry of Foreign Affairs, is being organised as one of the public awareness components from the project on “Conservation of turtle rookeries on the developed island of Mahé through increased public awareness and community involvement”, which is being funded by Mangroves For the Future.
Space is limited, so if you wish to attend, please contact Elke 261511/713500 or send us an email.

Posted by The Marine Conservation Society, Seychelles at 8:04 PM No comments: