YES we are still here!!

David has at last found the password to get back on to the blog so some long over-due posts can now be put up... for those of you who wondered where we were our apologies, it has been a very busy year! But enough of this and on to the important stuff starting with this report from Vanessa and the turtle team!

It’s been a productive turtle season and I’ve gained so much knowledge about the beautiful sea turtles and even got the chance to share the knowledge with volunteers and interested tourists, which was fun. I’ve had a lot of turtle encounters, once I even had 3 turtles come up together…… it was crazy……. But I managed to share myself among them and gather some info on each……… I’m nicknamed the Turtle Magnet at the office now!!! 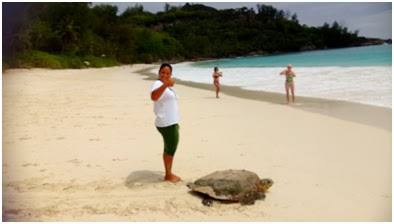 Me with my first turtle encounter at Anse Intendance….. I was over the moon!!
The patrols during the peak season were really hectic but I enjoyed every minute of it and got excited by every track found or a simple indication that the turtles were around!!  So you can imagine how I got when a turtle was encountered…… but no worries…… I kept myself under control and in line with the sea turtle monitoring protocol!! 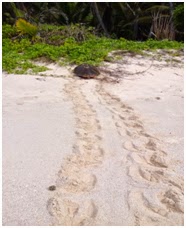 The beginning of the long nesting session!!


So now we are out of the peak season and I’m mostly concentrated on the Egg Clutch Survival data……. I must admit……. Digging up nest is not for the faint-hearted!! …………it gets really smelly and disgusting sometimes due to rotten eggs!! But the thrill of finding a few hatchlings, left behind and really tired unfortunately …… helping them find their way a little bit was really emotional….. it is important to note though that Hatchlings should be left to find their own way to the sea as it is essential for their survival and so as to have a good sense of direction, especially for the females so that they can come back to nest one day, but giving a little hand is essential when the Hatchlings seem weak.!! 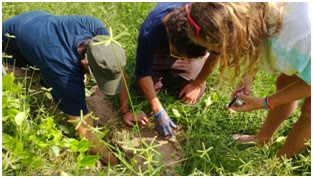 Pete, Harriet and Dan digging up a nest on Anse Grand Police
It’s been an amazing journey so far ………patiently waiting for the peak of the next turtle season!!
Posted by The Marine Conservation Society, Seychelles at 3:38 AM No comments: