Beach Profiling With the International School

It is certainly an interesting time of year to be beach profiling at Beau Vallon! Now that the North West monsoon season has arrived the sea in Beau Vallon Bay has become pretty rough and the beach is beginning to change shape quite dramatically. 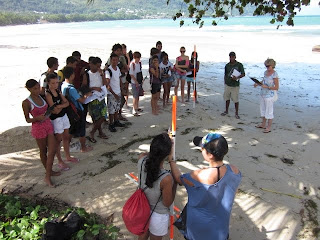 Georgia explaining how to set up the beach profile
Today Georgia French (Project Coordinator) and Uzice Samedi (Researcher) took a group of 20 students from the International School on a beach profiling trip to teach them the methods behind the technique. Beach profiling is used to measure the slopes of different sections of the beach. MCSS profiles several beaches every month so that we can see how the beaches are changes in shape over time.This is important for nesting turtles as the shape of the beach effects how easy it is for female turtles to crawl up it to lay their eggs. For example, erosion of the sand by the sea can cause erosion cliffs to form (demonstrated in section B to C in the diagram below) which can be impossible for turtles to climb.

Erosion can also wash away sections of the beach that turtles have already laid in, destroying their nests. However, beaches are not constantly eroding, there is also sand accretion where sand is deposited on the beach, making it bigger. It all depends on the monsoon season and if any coastal engineering has been undertaken on or near a beach. Coastal engineering can include building sea walls, jetties and groins. These structures change the way that the sea water moves around a shore line and so effects how sand is eroded or accreted.
To measure the beach profile, you need two ranging poles, an Abney Level, a measuring tape, data forms and pencils. Clipboards are very helpful when it is windy as it was today! Each section of the beach is measured and using the poles and Abney level, it is possible to measure the slope (in degrees and minutes) of each beach section. If a section of the beach is flat, the Abney level will read zero degrees, if it sloping down the Abney level will give a negative reading in degrees and minutes and so on. 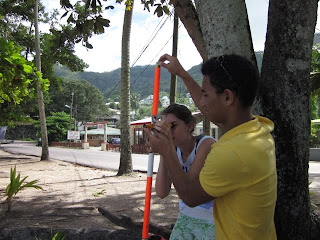 Two students get to grips with the Abney level
The information gathered on the beach is then put into our beach profile software which produces graphs of the beach profile for us. MCSS will hopefully be starting a new project on coastal erosion in the coming year funded by Mangroves For the Future. This will enable us to get new hi-tech equipment and software that will give us a much better idea of sand movement patterns around Mahé which will allow us to give good advice to coastal managers and developers. 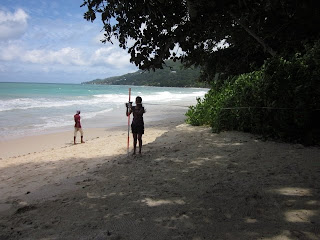 The team hard at work profiling Beau Vallon beach
Everybody did a great job at the measuring today and it was lovely to see everyone helping each other out. Special thanks has to go to those brave enough to hold the pole at the last point of the profile as this was in the sea!
Posted by The Marine Conservation Society, Seychelles at 9:59 PM No comments:

MCSS carry out Turtle Monitoring patrols on selected beaches in the South of Mahé which involves walking the full length of the beach at the vegetation line to check for any turtles or turtle tracks. We carry out turtle monitoring patrols throughout the year and increase the patrols to three times a week during the peak nesting season (October to January) for Critically Endangered hawksbill turtles (Eretmochelys imbricata).
The purpose of the turtle monitoring patrol is to collect data in order for us to increase our knowledge of turtle populations to help protect them further. An additional benefit of our turtle monitoring patrols is that our presence on beaches can deter poachers.
Yesterday, during the usual turtle monitoring patrol, Uzice and Cathrina came across something wrong on Anse Bazarca. There was a hawksbill turtle track going up the beach but not going down. Instead there was a pseudo turtle track, suggesting the cunning poachers knew that the beach would be later patrolled. Our experienced staff spotted the imitation track straight away, most likely made by the attempting poachers. 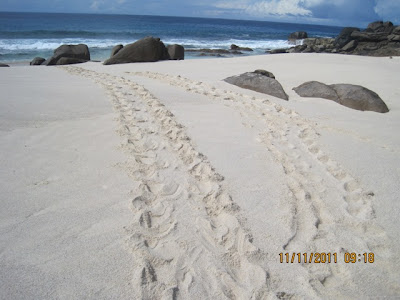 The real up track on the left and the phoney down-track on the right...
This led Uzice to check the vegetation thoroughly and fortunately, found the hawksbill turtle lying on its back. A turtle on its back is unable to right itself and is the traditional way of immobilising a turtle to collect later (to turn turtle?), presumably in this case, when less people are around. 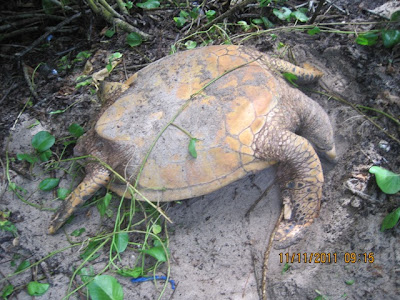 The turned-turtle, on its back stranded until the poachers returned, or someone rescued her!
Thankfully, we were there to rescue the turtle and Uzice carefully returned the turtle the right way up so that she could make her way back to the sea. Cathrina and Uzice made sure they watched the turtle safely returned to the sea.
Hawksbill turtles are critically endangered and granted full protection under the Wild Animals (Turtles) Protection Act (1994). However, they are still being poached in the main for their meat. This is surprising as the hawksbill meat can be poisonous! 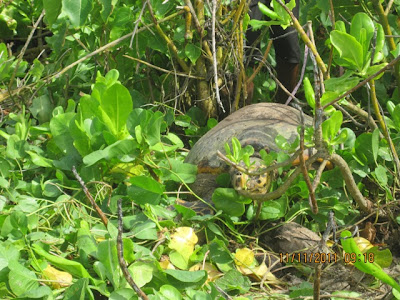 Right-way up and heading back to the beach, sea and safety!
The sad fact is that nesting turtles appear to be a target and usually poached prior to being able to lay. Hawksbill turtles can take from 25 to 30 years to mature and can lay between three and five egg clutches with an inter-breeding interval of a minimum of two years. Therefore, poaching nesting turtles are having greater impacts on the turtle population. 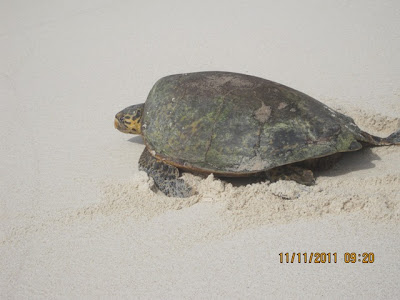 Safely on her way back to sea...
All at MCSS are extremely happy that we have prevented this attempted poaching from being successful and we have helped one more turtle back to sea.
Posted by The Marine Conservation Society, Seychelles at 8:02 PM 1 comment: