A canoe may have saved Allison’s life 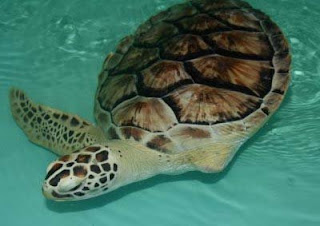 Allison the one flippered turtle, photo Eric Gray
Allison has spent most her life swimming in circles. Not surprising considering that she only has one flipper. At only 5 years old, she has finally been given a new lease on life after being fitted with a black neoprene “ninja” suit. The suit which looks like a wetsuit, covers about three-quarters of her body and has a carbon-fibre dorsal fin attached to her back, allowing Allison to glide gracefully across her 12-foot pool along with the other turtles at Sea Turtle Inc, a Texas not-for-profit group that rehabilitates injured sea turtles.

“That’s a sea turtle doing what a sea turtle does,” said Dave Cromwell, a worker at Sea Turtle Inc. who joined the cheering crowd gathered around the 3,000-gallon pool. Allison moved along tranquilly, cutting lazy arcs, diving to munch lettuce and nipping at other turtles. The fin was acting like a rudder and giving her stability, and she could change direction by varying the strokes of her front right flipper. The first time Allison dove down to feed at the improvised salad bar of waving Romaine. Some people watching wept, Cromwell said.

Rescuers at Sea Turtle Inc. believe that a shark probably chomped her three flippers. According to curator Jeff George, 2-flipper turtles can be adopted by zoos while 3-flipper turtles can be safely returned to the wild. With only one flipper, a turtle spins and struggles to break the surface to breathe and is therefore, usually euthanized. 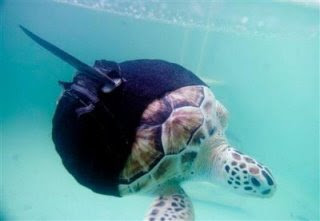 Allison doing her best to impersonate the shark who took 3 of her flippers, photo Eric Gray
When Allison arrived at Sea Turtle Inc. in 2005, she was a hand-size, bloodied turtle with little chance of survival. Allison, however, recovered from her injuries and wormed herself into the hearts of her rescuers enough that, in 2007, a team of scientists spent months trying to develop a prosthetic flipper to counter the thrust of her remaining paddle.

They made casts of hind flippers and high-tech prosthetics, but there was not enough of a stump remaining to attach it and it would either wobble loosely or cut off circulation if clamped down. Tom Wilson, a 21-year-old intern at Sea Turtle Inc. who stayed on to fine-tune Allison’s new gear, watched the failed attempts with the prosthetic and began thinking of a simpler solution. He thought of paddling a canoe and how its long keel allowed it to cut a fairly straight path through the water even if paddled from one side.

After fashioning a harness for Allison, the team experimented with various fin shapes and length and it soon became clear that this would work. Allison has gradually worked up from a few minutes swimming in the suit to two hours. Eventually she should be able to spend six hours a day gliding through the large pool, as she is gradually builds strength in her underutilized flipper. Her quality of life has improved dramatically and Allison shows her pleasure/displeasure by trying to swim away from the staff of Sea Turtle Inc. when its time to take the suit off. 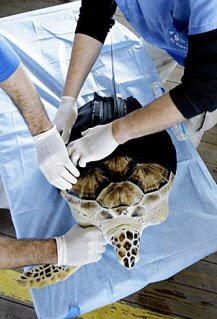 Allison being fitted with her ninja suit for another swim round the pool, photo Eric Gray

As Allison is expected to live over 150 years and could reach a weight of 500 to 600 pounds, its is important to refit her with new suits on a regular basis. Plans are underway for a figure-8 shaped pool with a shallow end where they will be able to get her in and out of the suit without carrying her from small pool to big pool as they do now.

Posted by The Marine Conservation Society, Seychelles at 11:44 PM No comments:

A lucky break for our turtles

The turtle eggs rescued by Adam and Elke hatched out 10 days after the nest was relocated. Elke was enjoying one of many happy shopping sprees in South Africa, leaving Adam to celebrate an unofficial father’s day all on his own, as he watched his babies head off into the horizon.

As mentioned in the previous blog, 115 eggs were relocated to protect them from being washed away by the encroaching sea. Only 62 hatched, with the others being checked to confirm they had not been fertilised. 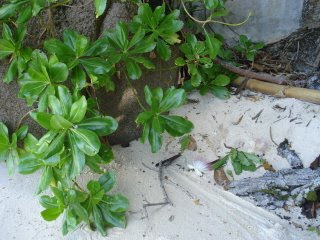 A close call. Two days after relocating the eggs, the beach area where the nest had been located was washed away, photo Elke Talma.
The 10 weird shaped eggs had been kept separate to see if the hatchlings were deformed, but luckily all was well, and the eggs that had been fertilised gave rise to a number of healthy looking baby turtles.

This season, we appear to have been having issues with low survival rates. In this case, a significant number of eggs did not appear to be fertilised while in other cases, continue rainfall meant that embryo’s from nests dug in poorly drained soil, died mid-way through the incubation period. The silver lining, however, is that if we hadn’t moved the eggs, 100% would have died! 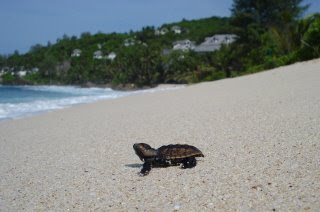 Hawksbill hatchling on Intendance beach, photo Elke Talma.
Posted by The Marine Conservation Society, Seychelles at 12:59 AM No comments:

Thanks for helping out!

MCSS would like to thank everyone who helped with turtle monitoring and beach profile mapping while Elke was on annual leave.
Vanessa Zialor, Nanette Port-Louis and Nigel Simeon from the Environmental Engineering Section in the Ministry of Environment with the assistance of Kirsten Gilray, an ex-MCSS volunteer, carried out weekly monitoring on behalf of MCSS in the South of Mahe. 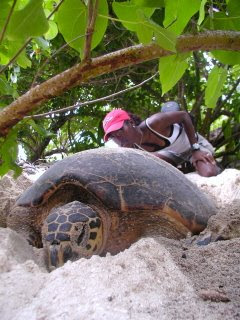 Vanessa Zialor with a turtle on Curieuse island, photo Pierre Andre Adam.
Additional monitoring was carried out on Intendance beach by Adam Abdulla, while Christopher Adrianne from the Tourism Police, the officers at the Grand Police Army base and David Deny, a resident of South Mahe, kept a lookout on neighbouring beaches. 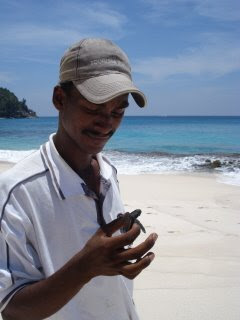 Christopher Adrianne with a his first ever hatchling, photo Elke Talma.
Unfortunately for them, there was no turtle nesting activity during the 3 weeks that Elke was away, but Vanessa and Nigel did see some hatchlings ... however, they didn’t have a camera handy to document the event!

Posted by The Marine Conservation Society, Seychelles at 7:22 AM No comments:

Carol, the satellite tagged turtle released by MCSS on 20th December 2007, is still transmitting data to MCSS via the Argos Satellite system. It has been over 15 months now since Carol was fitted with an MKF10 satellite tag. The tag’s battery life was expended to end after about 3 months, but researchers at MCSS who have been closely following Carol’s progress have been pleasantly surprised by the tag’s long life.

Previously, the longest recorded satellite track in Seychelles was from 3 turtles tagged in 1999 in the Cousin Nature Reserve, which according to Dr Jeanne Mortimer, transmitted data for over 13.5 months. 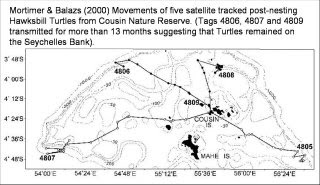 Carol’s journey from Seychelles to Madagascar, vie Coetivy island, courtesy www.seaturtle.org
Hopefully, she will be making her way back to Seychelles soon to nest during the 2009-10 Season. With any luck, the tag will continue to transmit, allowing us to track her journey to her birth place.
Posted by The Marine Conservation Society, Seychelles at 6:54 AM No comments:

Following a recent visit to Seychelles by scientist from the Kelonia Marine Turtle Observatory in Reunion, MCSS is looking at regional cooperation in a new project to test whether or not Hawksbill turtles can be identified through photographs.

Photo-id, using natural marks on the body, has proved to be an effective means of identifying animals over their life span. Indeed, MCSS has been using photo-id on whale sharks since 2001. This method of identifying wild animals minimises stress to the animals, and allows researchers to track an individual longer than with conventional marker tags, which are prone to falling off and becoming fouled in the marine environment.

In turtles, this method is still being tested. Results from Green turtles photographed by divers around Reunion, Mayotte and Glorieuse islands have shown that individual animals can be reliable identified in their foraging grounds using head shots. To date, 42 Green turtles have been identified by researchers at Kelonia, with at least 5 individuals being re-sighted a few months later. 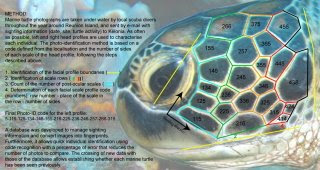 Each turtle is given an individual fingerprint based on the scale patter on its “cheek”, photo Kelonia.

The team at Kelonia have also used the photo-identification on Hawksbill turtles, but because this species is not abundant in Reunion, they have only been able to add 12 animals to their database. This is were MCSS comes in!

Seychelles host between 475 to 875 nesting females, which regularly visit our beaches to lay their eggs. If one assumes a 1: 1 ratio for males to females, then there are likely to be as many as 1,750 Hawksbill turtles just waiting to be photographed.

Over the years, Elke and various MCSS volunteers have photographed a number of nesting individuals, as well as foraging juveniles. While most of the photographs were not aimed at photo-id, a quick check has shown that there are at least 40 individual turtles that can be added to the database, allowing the Kelonia team to test and hopefully validate the Hawksbill photo-id database.
Posted by The Marine Conservation Society, Seychelles at 12:26 AM No comments: