The hawksbill turtle nesting season 2012-2013 got underway on the 16th July 2012. As with past seasons, the Marine Conservation Society of Seychelles (MCSS) turtle monitoring team start the season with the usual once weekly patrol of the nesting beaches in the South, South East and South West of  the Island of Mahe. The patrol frequency will increase to twice a week in September and eventually three times per week during its peak from October- February 2013.

There are two species of marine turtles that nests in the Seychelles waters. Chelonia mydas (green turtle) nest mostly at night throughout the year and Eretmochelys imbricata (hawksbill turtle) nest seasonally only during daytime.

At this time of year hawksbill turtles swim very long distances from their feeding ground to the Seychelles waters where they will mate and tirelessly crawl up the beach to deposit their precious loads of egg clutches in the sand to incubate, before returning back to their feeding ground.  Around 30-35 years ago these females hawksbill turtle were among some very tiny hatchlings which incubated on one of the nesting beaches of the Seychelles Islands. Now they are back again every two years to once again continue the nesting turtle cycle. Luckily some of the marine turtles might be able to safely make it back to sea while others might not be that lucky at this time when they are most vulnerable to poachers.

During the past four weeks only two nests have been recorded so far. The 1st turtle nest (hawksbill) was recorded on the 1st of August 2012 at Anse Grand Police after some heavy rainfall which occurs in the southern region.  During the last turtle patrol, lots of crab holes were seen in the nest and some eggshells were also found which indicate some crabs have been busy partying with fresh turtle eggs. Frequent dog activity also indicates that the nest has been partly dug up by stray dogs. 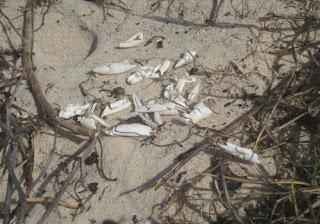 Predated Eggshell from the 1st nest at Anse Grand Police, dug up by crabs.

Another Hawksbill turtle nest was recorded on Saturday the 11th August 2012 at Anse Intendance (Photo below) by the Banyan Tree Resort turtle monitoring staff. The turtle probably nest the day before as no tracks were seen above the high water mark along the beach. We hope during the incubation period, the nest will incubate safely due to some sand erosion presently happening along the beach. 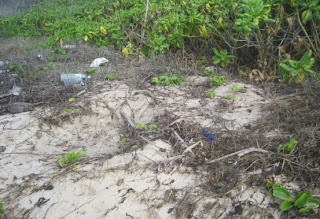 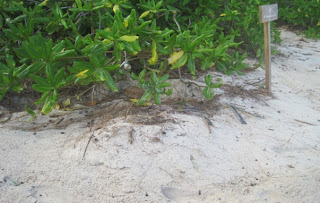 Posted by The Marine Conservation Society, Seychelles at 3:16 AM No comments: