After receiving a call on the MCSS hotline from a diligent member of the public about some turtle eggs in peril on one of our South Mahe monitored beaches, myself and GVI volunteer Brian Kneafsy went to the rescue. It turns out that the nice, safe place where a turtle chose to lay her eggs was not so nice and safe anymore due to the appearance of a large erosion cliff caused by changing tides. The sand had been completely washed away, taking the majority of the eggs with it and leaving the remainder partly exposed to the elements. 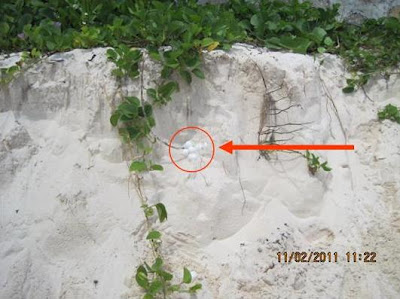 The exposed nest clearly visible in the erosion cliff, photo Georgia French
Obviously this is not conducive to nesting success so the eggs had to be moved further back on the beach into a new egg chamber created by us. Because the eggs were obviously quite well developed, it was critical that they remained in the same position that they were found in to avoid killing the developing embryos. To make sure that they remained in the correct position, we marked the top of each one with a small dot so that we knew which way up to place them in their new home. 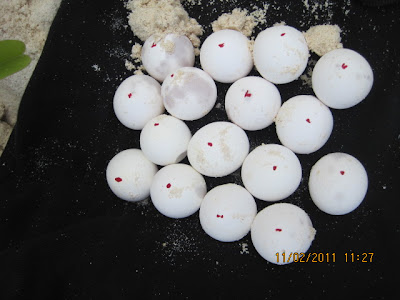 The recovered eggs with their orientation 'top' marks, photo Georgia French
Unfortunately, only 16 eggs were left from the entire clutch which would typically contain around 150. But still, every egg counts!
Each egg was carefully removed, marked and placed onto a cloth before transporting a few feet back from the edge of the cliff. 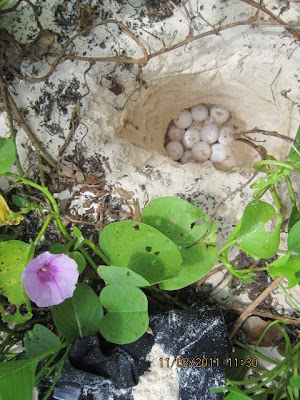 The new nest safely back from the high-water line, photo Georgia French
They were then delicately placed into the new chamber with all of the dots facing up before being covered with sand. Staff from a nearby establishment were told of the move and are now on the look-out for any hatchlings that may have survived. 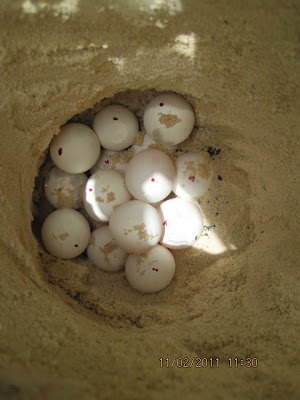 The relocated eggs, safely in their new nest, photo Georgia French
Erosion cliffs cause big problems for nesting turtles as they can not only expose nests that have already been laid but can prevent females from making it up the beach to the nesting platform in the first place. Hopefully in this case we got there in time and 16 new turtles will be able to make it to the sea.
.... Georgia
Posted by The Marine Conservation Society, Seychelles at 2:37 AM 1 comment:

The Day of the Turtle

The fifth of January was the first turtle patrol of 2011 and was a fantastic way to start the year which I think will be very hard to beat indeed.
On the way to the first beach of the day, we first have to drive past several of our other ‘priority’ beaches which we are currently monitoring twice a week. As usual I looked out the window of the truck as we went past these beaches to check for any turtle activity. I was very alarmed to notice a fresh looking turtle track with two dogs at the top of it. After we hastily reversed the truck and ran to the beach, we found a disturbing and sadly, fairly regular occurrence. Dogs had been digging up the freshly laid nest of a hawksbill turtle. 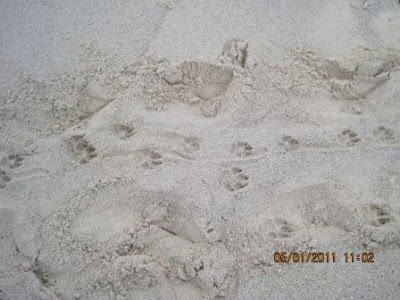 Dog tracks following a fresh turtle track was not a good sign... photo Georgia French
As the nest had already been partially dug up (thankfully they had not reached the egg chamber) and was in an area that may be inundated by water during high tide, the decision was made to relocate the nest to higher ground. We counted a very impressive 182 eggs and judging by the track width, this was a pretty big female, in all likelihood over 50 years of age. It would have been a great pity indeed if the dogs had attacked and killed this incredible animal. 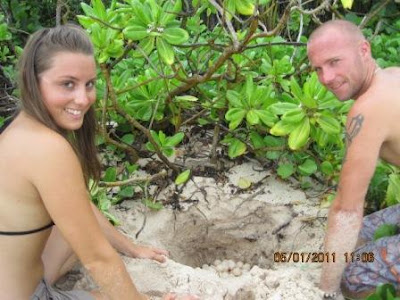 Caroline and Leon translocating the eggs to a safer location, photo Georgia French
After successfully relocating the nest, it was off to monitor the rest of the beaches. As soon as we set foot on our second beach of the day we saw a very long track meandering from a relatively low tide line to the beach crest vegetation. A single track – we had a turtle! 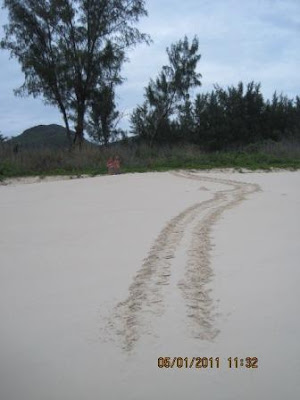 A single very long track was a good indication of a turtle still nesting in the vegetation, photo Georgia French
Upon careful closer inspection we determined that the female was still looking for the perfect spot to lay her eggs. As it turned out, it took two hours for this fussy female to choose a good place, dig her nest, lay and cover her eggs. It didn’t help that she managed to get very tangled in some vines when she attempted to return to the sea. After giving her a helping hand, it was a pleasure (and a bit of a relief!) to watch her return safely to the ocean. This female already had tags on both flippers so I could ID her from our tagged turtle data set. It turns out that she was last spotted laying eggs on a completely different beach, just over five years ago! Her carapace has also grown by 2.5cm in that time.
Elated after encountering this turtle we walked right to the other end of the beach where we found something very special indeed...our first hatchling! Most of the other hatchlings had already left the nest judging by the empty egg shells and tiny tracks. 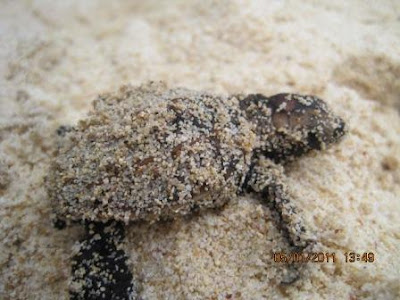 One tired little hatchling was left all alone for the march down the beach, photo Georgia French
That left this little guy to make the trip down the beach by itself, to much enchanted oohing and aahing on our part. It’s very hard not to ‘help’ such a vulnerable looking animal by carrying safely down the beach to the sea but it is important to let them make this journey for themselves. 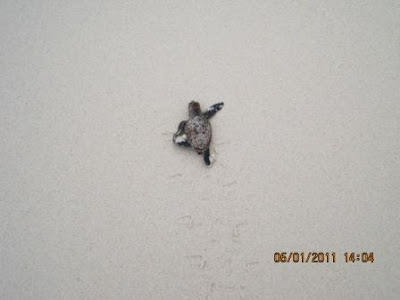 The hatchling makes it safely down the beach, photo Georgia French
The rest of the beaches yielded only a few tracks and we began to feel a little despondent when it started to rain heavily on our last beach of the day. I looked up, shielding my eyes from the rain and saw what I first took to be a large group of crabs. I wondered why they were all heading towards the sea.....hatchlings!
It was fantastic to see a big group all rushing towards the sea together, needless to say we completely forgot about the rain!
What a fantastic day!
Posted by The Marine Conservation Society, Seychelles at 2:03 AM 1 comment: