From newspaper article in Seychelles Nation (22/07/09)

Two men have been arrested but released on bail after they were caught red-handed at Bel Ombre with turtle meat, spear guns and illegally-killed fish.

Both men are from Green Estate, Anse Aux Pins, and are aged 30 and 42. Department of Environment officers said yesterday they have been trying for more than 10 years to prosecute one of the men for poaching turtle meat. 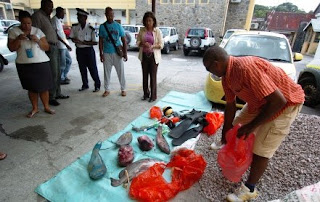 Officials examine the confiscated speargun, equipment and catch at Police HQ, photo courtesy Nation
The officials confirmed they received a tip-off on the department’s GreenLine at around 5.45pm last Friday and responded with the help of Beau Vallon police.

During the arrests the police seized 7.95 kilos of turtle meat, 12.85 kilos of fish that had been illegally killed by spear guns, and equipment consisting of spear-gun, mask, snorkels, fins, rope and knives. Under Seychelles law it is illegal to kill a turtle, or to possess, sell, buy or eat its meat.

Freelance conservation consultant Dr Jeanne Mortimer told the newspaper that there is a popular misconception that it is legal to eat turtle meat.

“It is illegal to possess turtle meat in any form,” she said. “If someone is eating it, then that person is also guilty of possession, so he or she can definitely be arrested and charged”. So for people who think it is OK as long as they are only eating turtle meat, they are informed that this is not the case and they will be committing a crime punishable by law.

“Offences involving sea turtles can carry a fine of R500,000 or two years’ imprisonment.” The public are reminded that it is also illegal to kill fish and other marine life using spear guns.

Meanwhile, the police investigation into the case continues.

NOTE – Based on MCSS observations, one of the suspects has been operating in the South of Mahe since 2004. Indeed the same individual was responsible for killing Carol’s “satellite tag-twin”, the second turtle tagged with a satellite tag by MCSS in December 2007.

Posted by The Marine Conservation Society, Seychelles at 10:43 PM 1 comment: 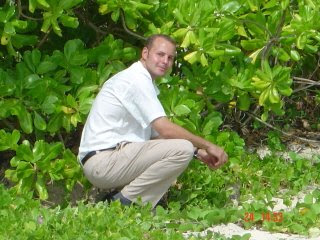 Anders Dimblad was working as Rooms Division Manager at Banyan Tree Seychelles in 2004 when he and a number of other resort staff underwent training in turtle monitoring techniques used in Seychelles under the MCSS/BHC project. He went on to tag 7 nesting Hawksbill turtles during the 2004-05 Hawksbill Nesting Season, but unfortunately left the programme in June 2005 when he was relocated to Angsana Ihuru in the Maldives as Executive Assistant Manager. 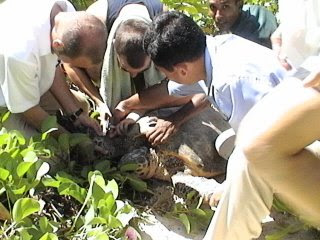 Anders (far left) tagging his first turtle, photo Elke Talma.
In the past 4 years, Anders has travelled the world, Banyan Tree style, and is now back in Seychelles as the Hotel Manager.

If Elke has her way, he will also be back on the beach tagging turtles, making him the only Hotel Manager in the world of a Five Star Resort trained to tag turtles.
Posted by The Marine Conservation Society, Seychelles at 5:52 AM No comments:

For 2 years now, MCSS has been monitoring for nesting turtles at Anse Grand Police and to Elke's shock and horror it was recently revealed that the site was a mine field of unexploded ammunition!

For over 30 years, Police Bay was closed off to visitors as it hosted the Grand Police High Security Prison (closed in September 2006) and a shooting range (closed in early 2009) for the Seychelles People’s Defence Force (SPDF).

As a known nesting site with an estimated population of 11 to 20 female Hawksbill turtles (Mortimer, 1984), numerous attempts were made by staff from the Ministry of Environment and Natural Resources (MENR) and MCSS to gain access to the beach. Finally, in September 2007, MCSS was allowed right of entry and thus added Anse Grand Police to its’ South Mahé Turtle Monitoring Programme. Elke was really pleased and declared herself “Turtle Queen” of South Mahe! 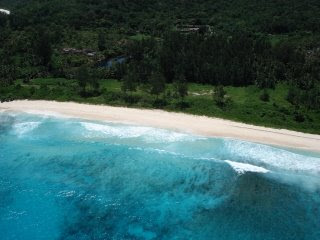 Anse Grand Police, with its SPDF Shooting Range located in the clearing behind the dune and the abandoned High Security Prison in the background, photo Guy Blain.
During the 2007-08 Nesting Season, it became clear that Anse Grand Police hosted a significant number of nesting turtles compared to its neighbouring beaches. When plans to build a Five Star Resort at the site were proposed, Elke was not at all happy about the prospect of tourist lounging on her nesting beach and messing with her turtles. The prolific poaching during 2008-09 Nesting Season (see previous blogs), however, has caused her to have a change of heart as the Hotel will surely discourage poachers from killing turtles on the beach and in the waters just offshore.

Anyway, back to the story!

As part of the new development’s planning process, the Arab consortium who owns the property organised for a bomb disposal team from U.A.E. to go over the shooting range - just in case - to search for possible unexploded munitions. They found more than they bargained for! 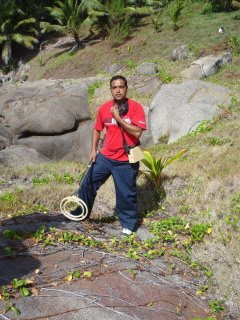 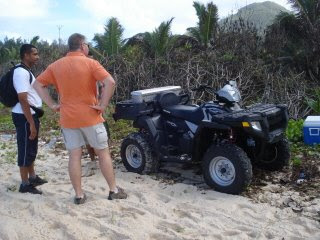 Quad bike, used on the nesting beach (much to Elke’s annoyance) to carry the heavy equipment and survey the dune areas at the South end of the beach, photo Elke Talma.
Their search area extended well beyond the shooting range and onto the turtle nesting platform and after 2 weeks, the team from U.A.E in collaboration with the Seychelles Army have declared the site safe – except for a small part in the wetlands which they were not equipped to deal on this trip!

Elke is keeping well clear of the wetlands until they return with the frog-men and submersible metal detectors! 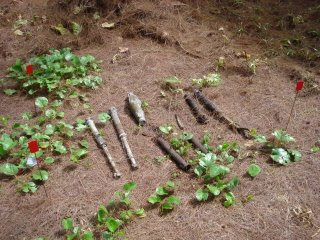 A small sample of the bounty, photo Elke Talma.
Posted by The Marine Conservation Society, Seychelles at 5:28 AM 1 comment:

The 20th issue of Torti d’Mer, the MCSS turtle newsletter, was published today. This quarterly newsletter was first produced in March 2004 under the MCSS Turtle Fund project. In June 2008, it was recognised on a national level when it was given an International Standard Serial Number (ISSN), listing Elke Talma (MCSS Research Officer and main author) and Dr. David Rowat (MCSS Chairman and part-time co-author) as the official editors/publishers of Torti d’Mer. 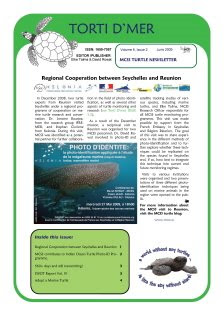 The newsletter is available to donors, forms part of the MCSS Turtle adoption kit and over the years has even become an educational resource for school kids through the National Library and Wildlife Clubs of Seychelles.

We hope that in the last 5 years, our newsletter, has fulfilled its role as an educative and public information document, as well as provided a forum for stakeholders to discuss issues of concern and provided commentary and opinions on developments related to turtle conservation in Seychelles.

Here’s to another 20 issues!

NOTE - If you would like to receive a copy of Torti d’Mer, please visit our web site and adopt a turtle!
Posted by The Marine Conservation Society, Seychelles at 7:43 AM No comments: