Every year nesting turtles swim all the way from their feeding grounds back to the beach where around 35 years ago they were hatched. During that time a female turtle can carry approximately 1500 eggs of different sizes ready to be fertilized and later deposited in the sand for incubation.
In the Seychelles archipelago, the endangered green turtle nest all year round, whereas the critically endangered hawksbill turtle nest seasonally. The Nesting Turtle Season which started on the 16th July 2010 has come to an end on the 15th July 2011. The first turtle encounter for the 2010-2011 seasons was recorded on the 18th August 2010 by the former MCSS Researcher Devis Monthy. A green turtle track was recorded at Anse Petite Boileau, unfortunately there was no indication that the turtle has laid even though there was evidence of digging in the area.
During the same routine patrol a number of Hawksbill turtle tracks were also recorded on several beaches in the southern region of Anse Grande Police, Petite Police etc.
Altogether a grand total of 84 routine weekly patrols for turtle emergences were conducted during the season by MCSS and other stakeholders in the turtle monitoring programmes.
The last nesting turtle emergence was recorded in the early hours of the 13th July 2011 at Anse Takamaka with a low tide. The hawksbill turtle was unable to dig its body pit as the emergence was to close to an establishment. The photo above shows the set of turtle tracks leading back to sea. Luckily the table wasn’t in the area when the emergence occurred.
Almost three weeks prior to that emergence, at Anse Riviere Gaspar two hawksbill turtle successfully laid their last clutch of eggs for the season before heading out at sea again to their feeding grounds. 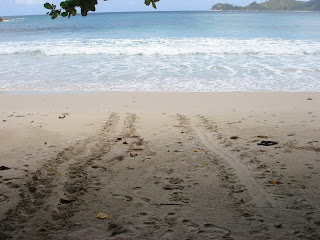 Upward and downward tracks from the emergence 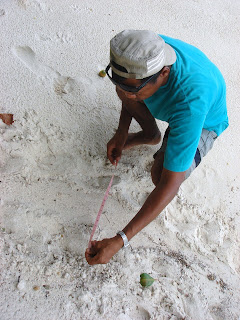 MCSS Researcher measuring the tracks
Posted by The Marine Conservation Society, Seychelles at 10:53 PM No comments: