Wilna's having a rough few days...

With the South East wind really kicking in this last week has been a rough one for Wilna the hawksbill turtle, tagged by MCSS with a satellite tag in December 2009. She had just nested on the South of Mahé when she was fitted with the tag which was a notable experience for the team as this was to be their first nigh-time tagging session (hawksbill turtles generally nest during day-light hours in Seychelles). 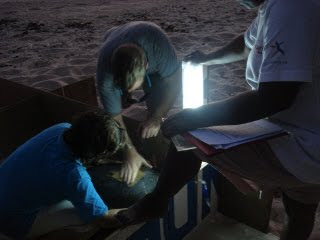 The MCSS team fitting Wilna’s tag in the dark, photo Betty Cecile.
Despite the challenge of working in the dark the team successfully deployed the tag which tracked her progress away from her nesting beaches as she headed North East to her foraging ground some 100km from Mahé.
Ever since December, Wilna’s tag has been transmitting daily updates about her position and diving habits until this week when her tag fell silent for two days. After the first day we thought that maybe there was a glitch with the data upload but by the second day we were worried that something had happened to Wilna as the tag’s battery should last for many more months and on checking with the satellite receiver system no messages had been received…
However, on the third day we had a confirmatory signal from the satellite system that Wilna’s tag is still functioning and she is still on her foraging grounds! 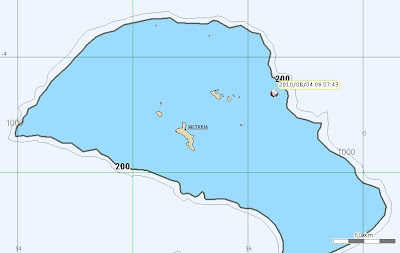 Wilna's position on the NE of the Seychelles Plateau
As these tags are very small and hawksbill turtles are fairly small animals, the tag is always very close to the water even when the turtle is resting on the surface. We suspect that with the rough sea conditions over the last few days the tag has simply not been able to transmit as even when the turtle is breathing it was likely to be too rough, keeping the tag semi-submerge all the time. 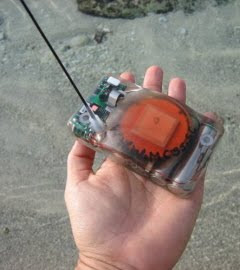 The satellite tag is very small and easily submerged in rough conditions, photo Elke Talma
So all is well… we just hope that Wilna isn’t getting too sea-sick…
Do turtles get sea-sick?
Posted by The Marine Conservation Society, Seychelles at 10:07 PM No comments: