Shanilla's first day on her work attachment with MCSS

Hello, my name is Shanilla Young-Kon,
I’m 18 years old. I live at Anse Forbans. I’m a student at Seychelles Maritime Academy studying Fisheries Science. I have an infinite passion and love for the oceans. I was currently placed at the Marine Conservation Society Seychelles(MCSS)- Wildlife Conservation and Rehabilitation Centre- Banyan tree for my work base experience for the next 3 months.

Unfortunately on my first day the turtle nesting season was already over and I didn’t get to see any turtles but luckily while patrolling and monitoring some nests on the nesting beaches patrolled by MCSS, we manage to see some hatchlings One particular nest had over 200 of them crawling anxiously to the sea, we ensured they all made it safely into the sea, it was so amazing.
I can’t wait for the upcoming adventure ahead of me.


Five and a half months in and finally I was lucky enough to see some hawksbill turtle hatchlings. I have spent most of my time with MCSS volunteering on the Fishermen’s Cove and Cerf island projects which are focused on corals, during which we frequently see turtles but was yet to see any hatchlings. And while many people think of 13 as an unlucky number March 13th was a great day for me, with 14 little hatchlings making an appearance.

Although most of the hatchlings from a 180+ egg clutch had already made their way out to the sea, possibly during the cooler temperature of the night, 14 hatchlings were still waiting to make their journey. We dug them out of the nest were they were waiting, weighed and measured 10 of them, and I attempted to keep the weighed and measured ones in a sand pen whilst we waited for the others, but they were extremely persistent to get to the sea. 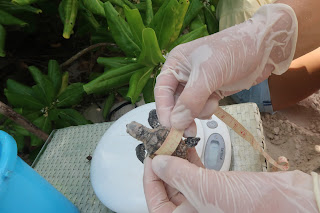 Keeping three or four in was fine but once it got to eight or nine they were definitely winning. I was really surprised at how strong they were and they can really wrap their fins around your hands and grip on.

Once the ten had been weighed and measured and a few guests from the hotel had arrived to watch the hatchlings, we let them make their own way down the beach and into the surf. Some of the hatchlings reached the sea shockingly quickly, whilst others seem to fall into every foot print possible. All 14 hatchlings made it to the sea without any help needed and swam off into the big ocean. Good luck little guys and I have my fingers crossed for more hatchlings this week. 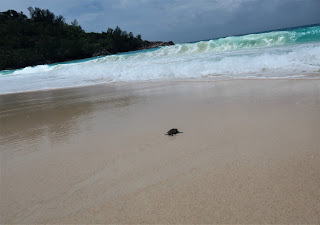