This season 2019-2020 has been a very busy one so far, with relevant improvement compared to the previous season, especially in terms of the number of emergences and nests recorded.
So far, MCSS has recorded 444 emergences and 266 nests in total from both Green and Hawksbill turtles, with the majority of records being related to the Hawksbill turtles. Green turtles are observed nesting all year round compared to Hawksbill turtles that particularly nest during October through to March.
We had the chance of having 41 Hawksbill turtles encounters so far in the season, and these can sometimes be from the same turtles being encountered several times in the season. Through our photo-identification process, we discovered that one of the turtles was last seen back in 2015, so it was a great joy to see her nesting successfully again for this season.
Poaching remains a major concern and unfortunately at least a dozen turtles have been recorded as poached for this season by MCSS, with the majority being Hawksbill turtles and in most cases the female had obviously not had the chance to lay her eggs, but was instead dragged away by poachers.
Hawksbill turtles are listed as critically endangered on the IUCN Red list, consuming their meat is also very risky as they feed on sponges that contain toxins, but it is nonetheless still practiced with consumers either buying the meat off as Green turtle meat unknowingly or some others claiming to know how to prepare it without being intoxicated.
The fact remains that sea turtles are protected under the law and their population are still at risk of extinction, so conservation of the species remains one of our main goal.

I am Jacqueline from Switzerland.
I fell in love with Seychelles flora and fauna after visiting the islands of Aride and Cousin in 2008. I love nature, in particular plants, birds, turtles and mammals, and feel it is my moral duty to spend some of my time helping to preserve the beauty that nature brings in our lives! What would it be without it?

After having volunteered with sea turtles in the Maldives and on North Island, Seychelles, I wanted to learn more about turtle conservation, photo identification, nest relocation, nesting behavior and collecting accurate data for the purpose of conservation and protection of the beautiful Hawksbill and Green Turtles which nest on Mahé Island.

As well as the turtle patrols, I love the bird surveying we do at MCSS. It’s also great fun to learn about beach profiling, feeding and cleaning the Giant Tortoise enclosure, and giving them a scrub once in while. I hope they will eventually be released on North or Curieuse Island where they would be able to roam and graze freely, and live their natural long life for more then 200 years!
I am also looking forward to learn more about the Terrapin Monitoring Program at the Center in the wetlands at Anse Intendance.
Last but not least, I also enjoy informing interested tourists and Seychelloise about what needs to be done in order to preserve the precious coastal biodiversity, and to help raise awareness of the many threats that the wildlife is confronted with.


Hi! My name is Emily Cruse and I am a Veterinary Student from Bristol, England. I am here at MCSS for four weeks to gain experience in treating chelonians.

My time here at the Banyan Tree rehabilitation center started with me performing a Post Mortem examination on a hawksbill turtle that had died the day before. It is a sad but necessary part of the job as it allows us to learn what had caused the death and how others could be treated in the future. 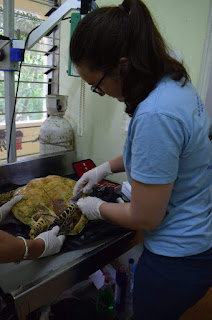 Day to day I spend my time with the trapping team performing health checks on any terrapins we catch. This involves looking for any signs of external injuries or parasites as well as weighing and measuring them. I also X-Ray any females to see if they are pregnant. During my time here I also treated one of the resident giant tortoises for an eye infection. Luckily it was noticed early so there was no need to use antibiotics and it resolved quickly.

When I’m not treating animals I carry out my own research project analysing the data collected from the trapping team. Using over four years worth of data I have been developing a body condition index scoring system for both the black mud and yellow belly terrapins. I hope this will be used in future to aid the rehabilitation of sick terrapins and help select the most appropriate ones for the breeding program.

THe Maritime students are back!


During the work attachment trapping is one of the many activities taking place here. Trapping is done to catch terrapins around the wetland to monitor their development, as in growth and weight, and also marking them by colouring their scutes with nail polish for identification. Treatment can also take place if needed. There two species of terrapins found in Seychelles and they are both critically endangered, those are the Black muds and the Yellow belly. The traps for the terrapins are set on Mondays and are continuously monitored during the week for any terrapins, then the traps are removed at the end of the week which is on Fridays.


Nevertheless, beach patrol takes place everyday during the turtle’s peak season (mainly for the Hawksbill species), however when its not the peak season the beach patrol is done only once a week on 14 beaches down south that are covered for any turtle related activities such as nests, tracks, hatchlings and also human impacts (such as poaching, picnicking and pollution). The Green turtles usually nest all year round.


Besides the field work, there’s also interaction with the guests where I need to take the guests for a tour around the center and explain how things work, especially about the project itself.
Posted by MCSS at 3:09 AM No comments:


Hi, my name is Joshua Maria, I am currently studying environmental science at the University of Seychelles. My interest is doing wildlife activities, such as taking part in beach clean ups conducted by The Ocean Project. For the summer, I am undertaking my internship at the Marine Conservation Society Seychelles’ Wildlife Conservation and Rehabilitation Centre, located at Intendance.
During the past few weeks of my internship, I have gained knowledge about freshwater terrapins and sea turtles, taken part in beach patrols. These required us to assess the beach for any sea turtle tracks or nests present, as most of the beaches located in the south of Mahe are popular sea turtle nesting sites.


I also had the opportunity to assist the Animal welfare officer in relocating the 8 freshwater terrapins back to their natural habitat, at the recently rehabilitated Anse Royale wetland, witnessed by Anse Royale secondary and A level students. However, I had the most extraordinary start to my internship, because I witnessed the release of the hawksbill turtle named Pink, who was released back into the sea after 2 months of rehabilitation. I hope to come back for my next internship.

My name is Harry Johnson and I am with MCSS for 5-6months of volunteering. After graduating from my Master’s, I decided I needed some practical conservation/research experience. I chose MCSS because of their project on Temporal Protected Areas.
Additionally, the Western Indian Ocean is an area which has received less scientific attention than others e.g. the North Atlantic in the field of marine science /conservation. This means it can be argued that data collected in this geographic area disproportionately more value than elsewhere.

So far, I have learned how to feed and care for a variety of chelonians, learnt the protocols for beach patrols and what data to collect. Other skills include what to do from a research perspective when encountering a turtle that is nesting or attempting to nest. More novel skills include how to use a machete. I intend to broaden my skill set as much as possible during my time here and am confident that I will be a better researcher/ conservationist by the end of it. I have three personal goals as well; to improve my diving, to climb Morne Seychellois, and to see as much of the wildlife the Seychelles has to offer.
Posted by MCSS at 10:26 PM No comments:

Hi! I am Ambre Chabert and I come from Marseille, south of France. I have a degree in biodiversity and ecology, and I am going to start a master's degree in marine ecology (IMBRSea). I have always been interested by the ocean and its secrets. Therefore, I would like to become a marine ecology researcher.


To gain more field experience, I am now an intern at the Marine Conservation Society Seychelles, as part of the Temporal Protected Areas project. For this project, we, along with other interns/volunteers and Vanessa (the project coordinator), conduct beach patrols to monitor nesting turtles. As it is not the peak nesting season, we monitor anthropogenic disturbance to evaluate factors that could be an obstacle for nesting turtles. There are only two species of turtle that nest in the Seychelles: the hawksbill turtle and the green turtle; critically endangered and endangered respectively. The hawksbill turtle nesting season is from October to January, whereas green turtles nest all year round. In fact, there is a green turtle nest currently and we might have to relocate it, since it is washed away by waves. MCSS monitors nesting turtles, identifies them, monitors the nests, relocates them if necessary and escorts the hatchlings to the sea when encountered. By doing so, they discourage poachers and increase the chances of survival of the hatchlings.


In one week, I have learnt so much and I can’t wait to see what these next 5 weeks have in store for me.